From Glasgow to Somerset, here are historian John Boughton's picks of the UK's most interesting public housing schemes featured in his latest book, A History of Council Housing in 100 Estates.

Published by RIBA Books, A History of Council Housing in 100 Estates celebrates the achievements of the UK's public housing, offering a counterpoint to its often negative coverage.

"Given that one-third of the population lived in council homes at peak in 1980, council housing has been a huge part of our shared national story, but it's been strangely neglected in mainstream histories and frequently maligned and misrepresented in media commentary," author Boughton told Dezeen.

"I wanted to tell the story of council housing more fully and objectively," he continued. "I also wanted to honour the experience of the millions who had lived it, to give some of that history back in a way that celebrated rather than denigrated their experience."

The book features a "deliberately eclectic range" of housing, ranging from 16th-century almshouses to contemporary models such as the Stirling Prize-winning Goldsmith Street.

Captured through archival illustrations and photos, these case studies vary from well-known estates to lesser-known places in regions across the UK.

"Naturally, I've included many of the better-known and more 'iconic' public housing schemes, but I wanted also to include a range of unsung and ordinary estates that were more typical of council housing as a whole," Boughton explained.

"Within this deliberately eclectic range, I've selected estates that incorporated and illustrated the big ideas in architecture and planning of their day." 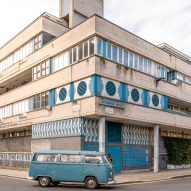 Ten buildings that showcase the beauty of London's council housing

Boughton, a social historian who specialises in social housing, wrote the book following his 2018 publication named Municipal Dreams: The Rise and Fall of Council Housing.

He hopes his new book will convey that their design is not solely responsible for social housing's triumphs and failings, as is often reported.

"It seems to me that their 'success' or otherwise often depends more heavily on the economic circumstances of their residents than the detail of their design," he said.

"This isn't, of course, to dismiss the importance of good design but it's a perspective that challenges the notion that architecture determines lived experience or that behaviour can be easily socially engineered."

But mainly, Boughton hopes to arm readers with a better understanding of social housing, which could help to "build better, just as we need to build more, in the future".

Read on for the author's picks of 12 interesting and unusual states featured in the book:

"The Pepys Estate started life in the 1960s as a Greater London Council showpiece, but as the local economy declined and problems of crime and antisocial behaviour rose in the 1980s, it was labelled 'failing'.

"Various phases of regeneration have seen its walkways and elevated shopping centre demolished and some of its social rent housing sold off to promote a more mixed and more affluent community."

"As their appearance testifies, these prefabricated homes were inspired by the Nissen huts that proliferated in the first world war.

"Their unusual form prompted some criticism, but the experiment that some hoped would be the solution to the housing problem of the country was ultimately killed by its failure to deliver promised cost savings."

"Glasgow suffered among the worst housing conditions in the country and its council was prodigious in its efforts to clear the slums and build anew.

"The Red Road scheme, with six slender 31-storey point blocks and two 27-storey slab blocks completed in the later 1960s, represented the height of its ambition. But the scheme became a symbol of poverty and social problems, and was demolished by 2015.

"This tenement estate of 17 five-storey blocks with its arts and crafts touches, completed in 1902, was designed by the Housing of the Working Classes branch of the London County Council.

"The council remained one of the most ambitious providers of public housing in the country until its abolition in 1965 and its Architect's Department was the largest architectural practice in the world and one of the best-regarded."

"The houses and layout of Burnage Garden Village reflect the cottage estate principles inspired by Ebenezer Howard's Garden City ideal, which were advocated by most early housing reformers.

"Unusually, it was a co-partnership venture but its high rents excluded lower-paid workers and the model did not flourish."

"Dujardin Mews, completed in 2017, was the first housing built by the London Borough of Enfield for 40 years.

"A difficult site required Karakusevic Carson Architects, one of a new breed of private sector practices committed to public housing, to come up with ingenious solutions to create terrace-style housing within a traditional streetscape."

"In Wythenshawe, with 8,145 homes and a population of 40,000 by 1939, Manchester City Council effectively created a new satellite town – but one planned by Barry Parker on best Garden City lines, with its plentiful open space and arterial parkways to ease traffic flow and halt sprawl.

"Parker's scheme also pioneered the neighbourhood units that would become commonplace after the second world war."

"Frank Lloyd Wright declared the Elwy Road Estate 'perfectly charming'. Its separation of people and traffic in a modified Radburn style that provided service roads to the rear of its major terraces was typical of the time.

"The housing and decorative detailing, provided by architect Colwyn Foulkes was, however, far more distinct and idiosyncratic."

"Northern Ireland's first new town, designated in 1965, was envisaged as a modernistic break with the province's sectarian past.

"Much of the early vision remained unfulfilled during The Troubles but, while the town has only around half the population originally projected, it has become a popular and desirable place to live more recently."

"Planned from 1967 though finally completed 10 years later, Dunboyne Road by Neave Brown – who lived on the estate in his final years – provided the model and signature style for Camden's much-praised low-rise, high-density housing of the 1970s.

"Its modernistic design incorporated terraced housing 'as near traditional as possible' in Brown's words. The popular estate is now Grade II-listed."

"Wilmcote House, completed in 1968, was a typical system-built slab block scheme of its time and suffered the problems of poor insulation and high heating costs common to many.

"Its demolition was mooted in 2010 but instead Portsmouth Council, with ECD Architects, agreed to a £12.9 million project to retrofit the estate to Passivhaus standards. The homes have a renewed lease of life and residents save on average 90 per cent on their fuel bills."

"When he opened the estate in 1947, Nye Bevan, minister of health and housing, thought these houses at Moorlands were 'fit for everybody'.

"It was a fulfilment of his ambition and that of the post-war Labour government to build attractive council housing that would appeal to a cross-section of the population and or, as Bevan put it more poetically, reflecting 'the living tapestry of a mixed community'."

The main photo of Red Road Flats is by Richard Chivers/RIBA Collections.