A police raid on the Hackney premises of architecture and arts charity Antepavilion in 2021 was unlawful, the High Court has ruled.

The Metropolitan Police, whose Territorial Support Group carried out the raid, has now been ordered to pay compensation to Antepavilion for damage caused by the forced entry. They have also been ordered to return all seized items from the site within 14 days.

According to Antepavilion, more than 100 police were involved in the raid, while footage showed at least 40 officers surging into the building after forcing open the door with power tools.

People who were unlawfully arrested and detained overnight will also receive compensation. The CCTV footage had shown Antepavilion building owner Russell Gray being pulled off his motorbike by eight officers, pushed up against a shutter and handcuffed.

"We always took the view that the raid was illegal," Gray told Dezeen. "The police conduct throughout suggested they knew it themselves but they didn't care."

It is believed the police were targeting an installation on the roof of the arts venue called All Along the Watchtower, a tensegrity structure by collective Project Bunny Rabbit commissioned as part of Antepavilion's annual design competition.

The lightweight structure, made up of bamboo poles and steel cables, was similar to structures used by climate protest group Extinction Rebellion to block roads during demonstrations.

Police claimed the raid and arrests were "proactive action to prevent and reduce criminal disruption which we believe was intended for direction at media business locations". However, both Antepavilion and Extinction Rebellion denied any connection.

Antepavilion is now calling for Hackney South and Shoreditch MP Meg Hillier to help uncover whether the government was involved in planning the raid.

The charity said it has sought disclosure from the Metropolitan Police of "documents that show who and what was really behind the decision to launch such a costly and high-profile raid on an art exhibit".

Then-UK home secretary Priti Patel had been a fierce critic of the Extinction Rebellion protests, branding the activists "criminals who... must be stopped".

She was once interviewed about her plan to introduce new police powers to crack down on protests at a police training centre, with what looks like a tensegrity structure in the background of the video.

The court order comes after Antepavilion and building owner Shiva Ltd brought forward a judicial review against Scotland Yard over the raid. The Metropolitan Police has been ordered to pay the charity's court fees. 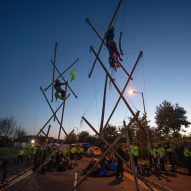 "The Metropolitan Police Service received an application for permission to bring a judicial review claim from Shiva Ltd and Antepavilion Ltd on 30 September 2021, alleging that the search of premises at 53-55 Laburnum St E2 and seizure of items was unlawful," a spokesperson for the force told Dezeen.

"The Administrative Court gave permission to bring the claim on 24 June 2022. This claim was resolved between parties prior to a substantive hearing. The matter is now concluded."

Antepavilion describes itself as aiming "to promote independent thought and symbiosis in the fields of art, craft and architecture".

It has organised its annual competition for temporary structures that challenge planning constraints since 2017, but the competition was put on hold last year after a planning dispute between Antepavilion and Hackney Council.

The photography is courtesy of Antepavilion.