Completed in the summer of 2022 – approximately 100 years after the original construction – the five-bedroom, 4.5 bath house keeps the historic character along the street but conceals a rear expansion that increased the area from 4,000 square feet (370-square metres) to 5,625 square feet (520-square metres).

"The changes to the historical house mirror the evolution of the single-family residence typology since the 1920s, where the less formal spaces of the house occupy a more central and integrated role in the life of the home," said architect Drew Mandel, principal of his eponymous studio based in Toronto, Canada.

The front facade was restored with new landscaping, hardscaping, materials and architectural detailing; but after years of poor renovations, the interior was gutted and replaced, preserving only the Centre Hall floor plan.

The team reinstated traditional detailing and proportions in the front rooms and added a new inglenook in the original parlour space.

The design references original details like the balustrade volute front door pattern and interior door panel that is based on the vintage doors of the Royal College of Surgeons.

"Originally considered for a location between the parlour and living room, in the correct style of the house, for two surgeon clients, the antiques were ultimately an inspiration for the new doors throughout, each pair with eight moulded panels to each side," Mandel said.

The team used the silver and off-whites of the original house to link the old structure with the expansion. The new envelope is clad in custom smooth-cut dimensioned limestone that is both stacked and hung and large panes of glass open up to a terrace and the surrounding greenery.

Selected to be warm, inviting and timeless, noble and natural materials were used for their beauty and durability according to "an heirloom mindset" in hopes that the new work "will be valued as being worthy of historical preservation".

The addition includes a new kitchen, family room, and breakfast room that features floor-to-ceiling glass panels with concealed framing that slide up into a hidden compartment for a disappearing corner.

Bedrooms comprise the second floor with a bright, airy master suite that takes advantage of the southern light through expansive glazing, while a third-floor office and lounge space look out across the yard from a 30-foot (9-metre) window.

Interior details are rich and exact – like motorized stone-faced cabinetry that dissolves into a monolithic vanity and a heavy fireplace that feels chiselled out of the mass of the house. 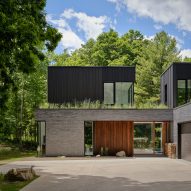 An original brick coach house was absorbed in the extension as a mudroom and secondary entrance.

The family gathering spaces transition seamlessly to the outside barbeque and terrace complete with a solid stone stair.

"This exterior room wraps around a large-scale wood-burning stone fireplace which grounds the rear of the house on the interior and exterior, both visually and structurally," Mandel told Dezeen.

The Craftsman house isn't the only 1920s renovation the studio has done in Toronto, overhauling a Georgian Revival-style brick house nearby and replacing a falling-down mid-block home with geometry that echoed the rhythm of its neighbours.