The Schiaparelli show, which took place at the Petit Palais on 23 January, kicked off Paris Couture Week and was informed by the poem Inferno – the first part of the three-book poem Divine Comedy by the 13th-century Italian poet Dante Alighieri.

Three of the dresses that appeared on the catwalk looked as though they were constructed from the taxidermied bodies of a lion, snow leopard and black wolf.

Despite their hyper-realistic appearance, each of the busts as well as their accompanying dresses were made from hand-sculpted foam, silk faux fur, resin and wool and hand-painted to achieve a life-like look.

"Nothing is as it appears to be in Schiaparelli's Inferno Couture," said Schiaparelli, hinting at the faux nature of the life-size animal busts and fur garments.

The first of the three animal-clad dresses to emerge from behind the interior walls of the 20th-century museum was a bustier leopard dress adorned with the handcrafted head of a snow leopard at its chest.

A second gown that followed shortly after had a more pared-down aesthetic and was made from floor-length velvet, with a lion's head embroidered on the shoulder of the gown.

The fashion house described it as "embroidered lion in hand sculpted foam, wool and silk faux fur, and hand-painted to look as life-like as possible, celebrating the glory of the natural world." 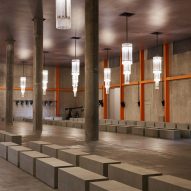 The third and final animal look was a body-covering coat-like gown made from faux fur. The head of a yellow-eyed wolf surfaced from the lapel of the coat and was almost swallowed by the oversized nature of its shoulders.

"Along with a nod to Dante's sense of organization (three looks for each of the nine circles of hell), I also took direct inspiration from some of his most arresting images," said Schiaparelli creative director Daniel Roseberry in the show notes.

"The leopard, the lion, and the she-wolf – representing lust, pride, and avarice, respectively – find form here in spectacular faux-taxidermy creations, constructed entirely by hand, from foam, resin, and other manmade materials," said Roseberry.

"Other pieces are inspired by the slippery, house-of-mirrors quality of his Inferno: the paillettes that tremble from some of the dresses are actually made from leather-slicked slabs of tin, and the baubles that cover one skirt are made not from fabric but wooden beads."

Between the taxidermied looks, Roseberry presented various sculptural, surrealist and referential garments for Schiaparelli. Takes on Schiaparelli's classical 1930s suiting, pioneered by Elsa Schiaparelli, was a common thread throughout the show.

Roseberry reinterpreted the suiting, adding a glossy snake in place of the collar of the jacket, as well as pairing the modernised tailoring with a hammered, hand-patinated brass bust that was worn as a headpiece.

The storied Parisian couture house was founded by Elsa Schiaparelli in 1927 and is currently led by Roseberry, who has helmed the brand since 2019.

The photography is courtesy of Schiaparelli.