The Saint Laurent show took place inside the Parisian art museum on the evening of 17 January 2023 and marked Saint Laurent's first menswear show in Paris under its current creative director, Anthony Vaccarello.

A continuous row of seating, in the form of a modular, black leather De Sede DS-600 sofa, snaked around the entire interior perimeter of Ando's 29-metre-wide and nine-metre-tall cylindrical concrete wall-cum-exhibition space.

A plush, stone-hued carpet covered the floors of the circular room beneath what was set to be the show's runway and leather-clad audience seating.

"Art and Saint Laurent have been complicit since the beginning, making Japanese architect Tadao Ando's radical structure-within-a-structure a natural setting for tonight’s concise and intimate presentation," said Saint Laurent in the show notes.

"The gleaming concrete cylinder echoes the luminous circle at the centre of the brand's last menswear show, almost inadvertently, the O shape, a symbol of perfection and purity of execution, becomes a recurring, pertinent thread at Saint Laurent."

The interior was dimly lit by spotlights regimentally organised along the walls of the concrete space behind the single row of seating.

A grand piano, skewed off-centre, was placed in the middle of the exhibition space beneath the 19th-century mural that adorns the ceiling of the glass-oculus rotunda. 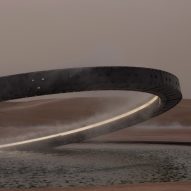 Under Ando's three-year restoration and renovation, the architect added the monolithic tubular concrete volume within the glass-domed rotunda at the core of the building, which also doubles as a viewing platform that is accessed via a staircase that runs along the exterior of the wall.

The cylindrical concrete volume extends into the basement of the building forming a large auditorium while also linking the ground floor of the rotunda to the upper levels of the building, which were similarly renovated and restored by the studio.

French businessman and founder of the luxury group Kering for which Saint Laurent is owned by François Pinault commissioned Ando with the renovation and restoration project in 2017 in order to display his collection of some 5,000 artworks.

Vaccarello explained that the show functioned as a sequel to his Spring Summer 2023 show in the Moroccan desert that saw London artist and set designer Es Devlin install a circular pond and glowing ring amid red sand dunes in the Afagay desert.

Vaccarello presented hooded garments and floor-skimming coats throughout the show, notably seen in his Spring Summer 2023 womenswear show in 2022.

Through replicating such silhouettes, Vaccarello explained that his men's and womenswear under Saint Laurent were interchangeable.

The photography is courtesy of Saint Laurent.