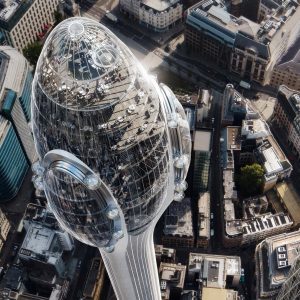 Stories about Foster + Partners, an architecture studio headquartered in London and with offices worldwide.

Foster + Partners works across architecture, engineering and industrial design, although it is particularly known for glass-and-steel buildings. Landmark projects include the 1986 Hong Kong & Shanghai Bank headquarters in Hong Kong, the 2004 Millau Viaduct in France and the 2004 30 St Mary Axe in London, which is better known as the Gherkin.

More recently it designed The Tulip (pictured left), which was set to be the tallest building in London until plans were rejected, and many Apple stores around the world.

The firm claims to put sustainability at the heart of its work and recently pledged to make its buildings carbon-neutral by 2030.

The firm was founded in 1967 by Norman Foster, who remains the chairman.

For jobs at Foster + Partners, visit its company profile on Dezeen Jobs.