A robotically woven carbon-fibre pavilion based on the lightweight shell encasing the wings and abdomen of a beetle is the second structure revealed this week from the team of architects and engineers at the University of Stuttgart (+ movie).

Like the Landesgartenschau Exhibition Hall unveiled on Tuesday, the ICD/ITKE Research Pavilion 2013-14 is a structure fabricated using a custom-built system of robotics, which were here used to create a series of modular fibre-composite components.

The project was developed by academics from University of Stuttgart's Institute for Computational Design (ICD) and Institute of Building Structures and Structural Design (ITKE), who have previously collaborated a pavilion based on a lobster's exoskeleton and a structure modelled on a sea urchin's skeleton.

"It is based on the development of a robotic fabrication process for modular, double layered fibre composite structures, which reduces the required formwork to a minimum while maintaining a large degree of geometric freedom. This enabled the transfer of functional principles of natural lightweight systems to architectural structures," he said.

The result is a double-domed pavilion with web-like walls and ceilings. It covers an area of 50 square metres, but weighs just 593 kilograms.

"It offers not only a unique architectural expression and spatial experience, it is also extremely lightweight and resource efficient," said Prado. 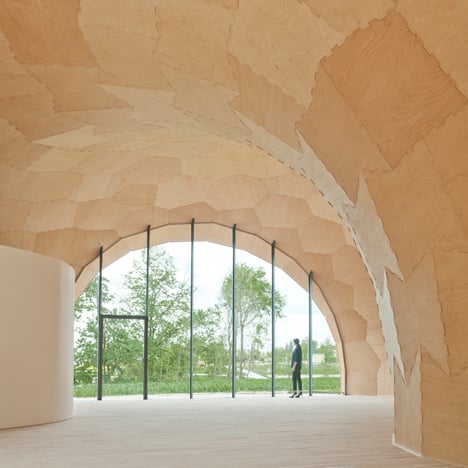 Landesgartenschau Exhibition Hall is a plywood pavilion made by robots

The team of researchers and students used high-resolution 3D models of various beetle shells – known as elytra – to conduct an analysis of the intricate internal structures, working closely alongside biologists and paleontologists from the University of Tuebingen.

"The performance of these lightweight structures relies on the geometric morphology of a double layered system and the mechanical properties of the natural fibre composite," they explained.

"The Elytra morphology is based on a double layered structure which is connected by column-like doubly curved support elements – the trabeculae. The fibre layout within a trabecula merges the upper and lower shell segments with continuous fibres," they said.

These structures were then translated into a series of design principles, realised using glass and carbon-fibre reinforced polymers to give the pavilion an optimum strength-to-weight ratio.

A robotic winding method was developed to fabricate each of the fibrous modules, which were impregnated with resin for addition strength. Two robots wound the fibres around the custom-made steel frames, and could be adapted to suit the propositions of all 36 necessary geometries.

"Coreless filament winding does not only save substantial resources through the needlessness of individual moulds, but in itself is a very material efficient fabrication process since there is no waste or cut-off pieces," said the team.

The project is part of an ongoing programme investigating how natural lightweight structures can be recreated using architecture. Each pavilion is researched and constructed over a period of 18 months.

Here's some additional project data from the University of Stuttgart: