Amsterdam designer Tuomas Markunpoika has glued together pencils and milled them into vessels streaked with the coloured leads (+ movie).

Each container in Tuomas Markunpoika's Amalgamated collection was created by individually gluing one facet of a pencil to another, taking advantage of the tessellating hexagonal shapes to form a solid block. 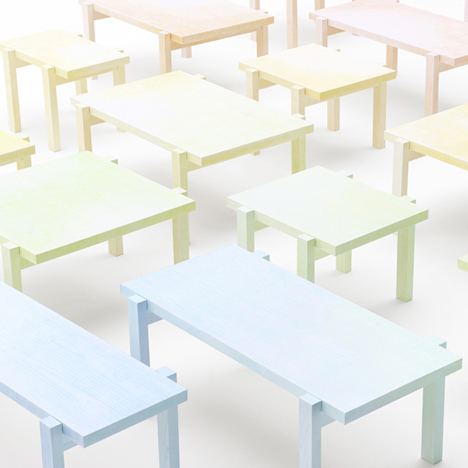 This construction was then treated like a chunk of wood and machined with a lathe into the form of a vase. Each shape reveals the inner structure of the pencils differently, forming a new pattern.

The vases are coated on the outside with lacquer and beeswax, and on the inside with epoxy resin to make them water tight.

Faber-Castell untreated wooden pencils were selected for the project for their precision and uniformity, which was crucial in the construction of the vases.

"For as long as I can remember, I have had a jar or two full of wooden pencils on my studio desk - some new, some half-used, some graphite and some colour," Markunpoika told Dezeen. "I realised how beautiful and interesting they are as objects. Using them only to illustrate my ideas seemed as if I was not using them to their full potential."

The vases are a limited edition and come in three different shapes with colour options. "I wanted to use standard graphite pencils as a benchmark," said Markunpoika. "The blue colour was chosen to contrast with the natural colour of cedar wood."

Even though a large number of new pencils are required to make each vase, Markunpoika believes that creating new unique objects with a longer lifespan justifies their use.

"The problem of sustainability in a design context is that on many levels it still promises infinite consumption of goods with impunity" he said. It also makes us feel virtuous about throwing things away."

"I want to design objects that endure time, objects that you fall in love with and will not throw away," he added. "I don't believe I can achieve the same visual effect with other materials."

The vases were launched the Design Miami/Basel event last week and are available exclusively through London's Gallery FUMI.

For his 2012 Design Academy Eindhoven graduate project, Markunpoika covered pieces of furniture in steel rings before burning them to leave fuzzy fading memories of the originals.