Our second project today from Melbourne studio Clare Cousins Architects is a one-bedroom apartment where a timber box and a mezzanine platform have been inserted to create three extra sleeping spots, without losing any living space.

The owners of Flinders Lane Apartment, who were expecting their first child, asked Clare Cousins Architects to transform their 75-square-metre inner-city Melbourne flat into a space that could meet the needs of a young family.

"They had a strong idea of the aesthetic they wanted to achieve. They provided us with a great collection of images, including some from Atelier Bow Wow's Mountain House, and plenty of examples of Japanese architects using small spaces in an unconventional way," Clare Cousins told Dezeen.

"This brief reassured us that we could push the boundaries of a 'typical' apartment and present an imaginative design response." 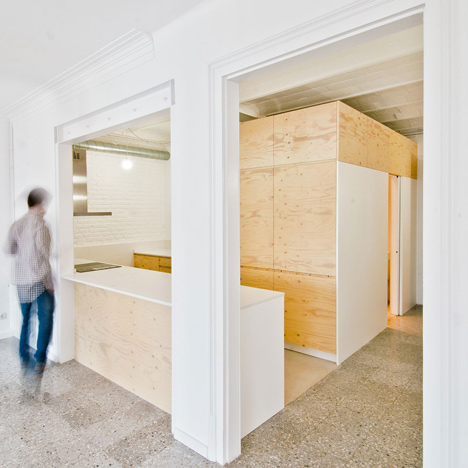 The architects replaced the Melbourne apartment's former bedroom with a timber box made from hoop-pine plywood – a light-coloured Australian timber - which houses two smaller bedrooms, each the length of a bed. They also added a mezzanine sleeping space for guests near the entrance.

"With a footprint of just 25 square metres per person, the design minimises the sleeping areas of the small apartment and maximises the living and social spaces," said Cousins, whose previous designs include a timber beach house on stilts and a brickwork house extension.

The parents' bedroom is raised slightly above the floor and screened from the living space by three sliding doors, painted in tonal colours that complement the wood. The steps leading to the bedroom also double as additional seating in the living room.

"The sliding screens were influenced by Japanese shoji screens. The bedroom engages with and becomes an extension of the living space, or it can be closed off for privacy," said Cousins.

The timber box also features a wall of storage along one side, accessible from both the social spaces and the bedrooms, and the opposite wall features compact work station built into a nook.

"In our increasingly consumer culture, there's something serene and comforting about a lack of excessive 'stuff'," said Cousins. "Carefully considered storage provides space for each family member's essentials, yet limits consumption and places greater value on the objects that they have chosen to live with."

The limited palette of materials is designed to enhance the sense of space in the apartment and also reduce costs. "Plywood is affordable and readily available and much of the joinery was designed to be constructed by a carpenter, further minimising construction costs," said Cousins.

Low-cost materials have also been used in the bathroom, where inexpensive tiles are arranged in different sizes to give the walls and bath a more bespoke look. Gold-electroplated taps also increase the sense of luxury in this space.

The apartment is in a heritage-listed building dating from 1898, originally designed as offices for the British and Foreign Bible Society, then converted into flats in the 1990s. The renovation is designed to show that the usefulness of such inner-city conversions can be expanded beyond the needs of single and couple occupants.

"The sensitive adaptation of existing heritage spaces to suit the requirements of their users is fundamental to the sustainable development of our inner city," said Cousins. "This project demonstrates that high-density inner-city living and modern, functional family homes need not be mutually exclusive."

Photography is by Lisbeth Grosmann.

Located in a heritage-listed building in Melbourne's CBD, this project re-imagines a 75m2 apartment for a young family. The clients, who were expecting their first child, aimed to convert the existing one bedroom space into an apartment suited to the needs of a young family.

Traditional Japanese houses inspired the two new 'micro' bedrooms. The size of the first, just 2m wide, was determined by the length of a single bed; the second, a raised platform to support the mattress-only bed, is cocooned by plywood. Sliding screens permit the room to be visually open providing additional seating to the living space, and like the Japanese inspiration, it can be transformed to a private zone by sliding the screens closed.

A nod to Shigeru Ban's Furniture House, the full-height joinery separates the micro rooms from the living space and is accessible from both sides, providing flexibility in how the storage is used. A mezzanine loft provides a sleeping platform for guests, and access to additional storage. A compact work station is integrated in the nook below. The bathroom is fitted with creatively composed, inexpensive tiles and gold electroplated tapware in this otherwise understated city family dwelling.

With a footprint of just 25m2 per person, the design minimises the sleeping areas of the small apartment and maximise the living and social spaces to be enjoyed by the occupants. The new floor plan makes the most of generous ceiling heights and precisely locates each of the joinery walls to take advantage of the original windows on three of the four perimeter walls. The resulting light filled living rooms provide amenity commonly found in much larger houses.

Conceived over 100 years ago as a commercial office building, the heritage listed CBD building was converted to small apartments in the early 1990's. To suit their growing family, the clients made the conscious decision to expand the program of the existing small dwelling rather than relocate to larger low-density housing in the suburbs. The gradual densification of program within this single apartment over time reflects the current necessity for high-density living within our existing built environment. The sensitive adaptation of existing heritage spaces to suit the requirements of their users is fundamental to the sustainable development of our inner city.

The clients' decision to remain in a small space allowed their modest budget to be maximised by efficient spatial planning and a creative composition of commonly available materials. The benefits of small scale living become apparent in numerous ways; mechanical heating and cooling of the family home is reduced to little more than a single room, while proximity to public transport makes the family's decision to live without a car possible.

The reduced palette of materials used throughout the project not only enhances the perception of space, but also provides dual cost-benefits; plywood is affordable and readily available and much the joinery was designed to be constructed by a carpenter, further minimising construction costs. Creatively composed inexpensive bathroom tiles are elevated by gold electroplated tapware.

In our increasingly consumer culture, there's something serene and comforting about a lack of excessive 'stuff'. Carefully considered storage provides space for each family member's essentials, yet limits consumption and places greater value on the objects that they have chosen to live with.