With heavy rain forecast for this weekend's Glastonbury, festival-goers will be wishing they had a pair of these lightweight wellington boots that can be rolled up and stuffed in a bag (+ movie).

Called Sardines, the boots squash down to a fifth of their original size and have been developed by Barcelona designer Estel Alcaraz.

She got the idea after getting caught in the rain without adequate footwear and wishing there was a more portable alternative to traditional rain boots. 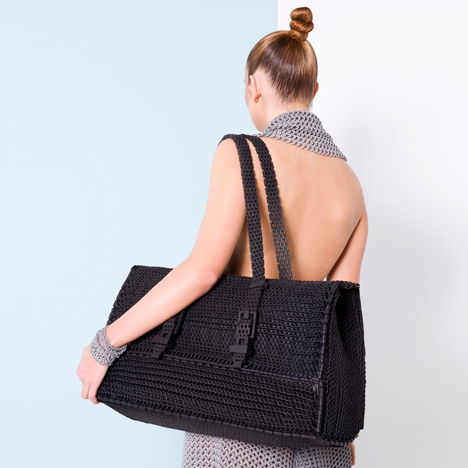 "One evening in February 2012, I got caught in the rain," Alcaraz explained. "By the time I got home, my clothes were soaking wet, even my socks."

"When I arrived home I saw a squashed water bottle," she added. "It was interesting to see how its volume was reduced to one fifth. At that moment, I wondered why my rain boots couldn’t reduce in size just like the water bottle."

The boots are made of injection moulded thermoplastic polyurethane (TPU) - a highly elastic, recyclable plastic.

"This material allows Sardines to be one of the most efficient types of rain boots for transportation, while also helping to reduce the impact on the environment," says the designer.

The name Sardines comes from the Catalan expression "estem com sardines," which means to be squashed like sardines in a tin.

Alcaraz has designed a logo based on a sardine tin to reinforce the point. "I have squeezed my boldly coloured rubber boots as tightly as sardines in a tin," she told Dezeen.

The boots come in a range of bright colours and feature an elasticated strap that can be used to keep the boots together when folded, and worn as a garter when the boots are worn.

"At the moment Sardines is only a project, although I'm looking for some options to commercialise the concept," said Alcaraz.

Sardines was recently awarded joint second prize in the 2014 Designpreiz Halle design competition, which this year was themed around water.