Azusa Murakami and Alexander Groves of Studio Swine have revisited the process they developed to make optical frames from human hair to create a new range of accessories (+ movie).

Studio Swine developed a technique to infuse hair in natural resin as an alternative to wood while studying at London's Royal College of Art. 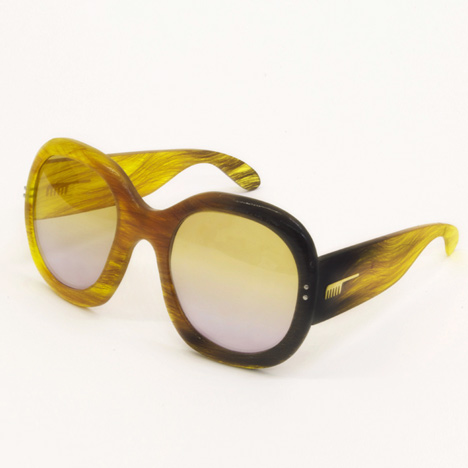 "We are interested in the future of resources," the duo told Dezeen. "Hair is one of the few natural resources that is increasing globally. Hair grows sixteen times faster than the trees used for tropical hardwood which can take 300 years to reach maturity."

For the Hair Highway project, the designers travelled to China to visit a hair market in Shandong and film parts of the hair trade.

"Since working with hair we have always wanted to follow the route back to the factories that process it, the traders that take it to market and the people that grow and sell it," they explained.

Exploring the potential of this abundant natural material, Studio Swine created a series of accessories to show off its properties and change preconceptions about using human hair in products.

"We are used to wearing silk, which comes from insects, and wool which is sheep hair – human hair too has that moment where it becomes dehumanised," the designers said.

They created a series of decorative pieces, which includes smaller items like a set of decorative boxes, vases and trinket holders, as well as a large inlayed screen and the base for a combined mirror and dressing table.

Asian hair was chosen specifically because it "grows faster, is better quality, and thicker than European hair", according to the studio.

The hair is sorted, brushed and packed in the factories, then dyed and bundled before shipping.

To create the items, the strands were laid out flat in a thin layer and coloured resin was poured over the top.

Once set into a solid block, the material acts like tropical hardwood. It was sawed into sections and glued back together to create patterns from the different colours.

The simple shapes of the pieces were influenced by the art-deco architecture and design found in Shanghai.

"We were inspired by the geometric lines of Shanghai Deco style," said the duo. "The 1930s were a golden age in Shanghai and it is still an aesthetic that is intrinsically linked with its character."

Studio Swine's resource-based research has also lead the designers to create a mobile foundry used it to cast aluminium stools from drinks cans and a machine that transforms plastic picked up by fishing trawlers into chairs on board the boats.