Japanese design duo We+ has created a series of magnetic chairs and vases that are covered with thousands of tiny steel rods.

The collection comprises a chair and a series of four vases, which are covered with steel rods measuring 1.2 mm in diameter and 15 mm in length that are magnetically connected to them.

The steel frame of the chair is designed as a grid structure with magnets placed at each intersection of the grid.

Steel rods are placed on the chair and vases' magnetic frames to create unusual hairy-looking surfaces that can be shaped and styled by hand.

"The orientation, density and overlapping of the steel wires are controlled by magnetic force and interact with each other," explained the Tokyo-based studio, which is led by designers Toshiya Hayashi and Hokuto Ando.

"When you sit on the chair the wires are made to move in relation to the body, making it much more comfortable than we anticipated it being," Hokutu Ando told Dezeen.

"We believe that this texture, formed by natural phenomena, created without the intention of a designer, produced a chair unlike any other, and thus may even offer a new point of view," Ando continued. 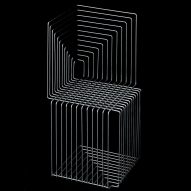 Meanwhile, the vases come in four different shapes and sizes; their bristly and cold texture providing a counterpoint to the delicacy of the flowers they hold.

"Rather than simply designing shapes, we are utilizing magnetic force to design a process that creates shapes,"we+ continued.

Hayashi, who graduated from Hitotsubashi University in Tokyo, and Ando, who studied at Central Saint Martins in London, presented the Swarm collection at Rossana Orlandi during Milan design week, where it was singled out by Dezeen as one of five designers to watch on Instagram's newly launched @design account.

"In our studio we take care to always take stock, research and develop any natural phenomena that peaks our interest," Ando explained to Dezeen. "Magnets, and magnetic forces were one of those that we took notice in, and saw the possibilities in it's ability to create an organic texture that can not be depicted on a plan."

The studio said that in the future, it would be open to exploring ways in which to incorporate the technique into the design of larger installations or a permanent building.

Other designers who work with magnets include Dutch designer Zelf Koelman, whose clock uses magnetic fluid under the control of electromagnets, and fellow Dutch designers Iris van Herpen and Jólan van der Wiel, who collaborated to create a collection of dresses with magnets.

Photography is by Masayuki Hayashi.