The shape of the household microwave has remained largely the same since the Amana Corporation launched the first domestic countertop version in 1967.

Instead of the familiar metal box with a door, Jake Rich's Mediumwave is an injection-moulded polypropylene pod with a removable lid and a footprint the size of a dinner plate.

"When the technology was invented and the next step was to make an affordable domestic appliance, the easiest and most efficient way to do this was to encase it in a metal box," Rich told Dezeen. "I wanted to challenge this archetype and design a microwave that is intuitive and responsive."

The clear lid holds a pressed, perforated metal dome that prevents the radiation waves from escaping, but also gives the user a full view of what's inside. 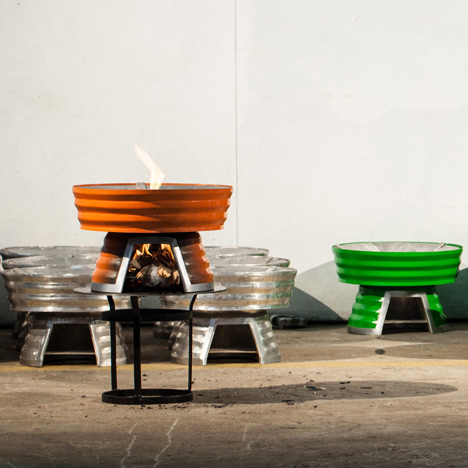 When it's in place, the lid completes the circuit for the microwave to work, and when removed, it breaks it – making smelling, tasting or stirring food during cooking simpler and more familiar to those used to cooking in pans on a hob.

"Having your food accessible at any moment was a way of trying to counter the feeling of detachment people have from their food when they cook it in a conventional microwave," said Rich.

"Using light in this way provides an immediate and tangible understanding of what power level you are cooking at," said Rich. "It encourages the microwave to be used in a similar way to a hob, and as a tool you have control over."

Rich has also simplified the controls down to just two – a power dial and a timer. Pushing the timer starts the microwave, and the dial can be used to vary power levels during cooking.

The curved design makes it easier to clean, and wheels allow users to roll the machine to where they're cooking or slide it away when they need more space.

It is currently on show at the city's Business Design Centre for the second part of the New Designers graduate exhibition, which continues until 5 July 2014.

This year's Kingston University graduates have also designed a kettle shaped like mugs to save water when making tea and a series of hybrid eating utensils made by fusing western and eastern cutlery.