Kate Moross directed, animated and edited the colourful visuals to accompany Wild Beasts' soft rock track Mecca, after their collaboration on a video for another track didn't work out. 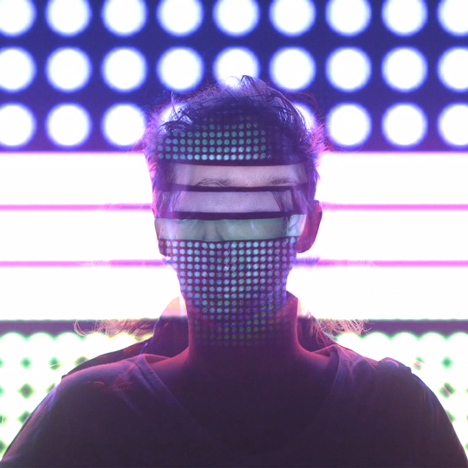 "They still liked my treatment so we all met up in Highbury, London, and chatted about reworking the video for Mecca," Moross told Dezeen. "We changed a few of the elements and adjusted the feeling to work with the new track."

Blocks of colour and sketchy lines flash over the false-colour imagery, ranging from seascapes to pill manufacturing.

Silhouettes of the band members standing, sitting and moving around are filled in with textured graphics including water, grass and architectural materials.

There is no narrative to the sequence, instead the seemingly random visuals just change to follow the pace of the track.

"I'm not one for telling specific stories, I just like to paint a picture and let other people see what they want to see," said Moross.

"I think there are elements of life and death, past and future, just a general feeling of surreality and definitely psychedelia," she said.

Moross said she wanted to create a multi-layered video that included elements that might not be spotted during the first viewing.

"Something different, something distracting, something that has lots of layers so you can watch it 10 times over and see a new detail each time," she said.

Although there was no intentional reference to the 1990s, Moross said that the era she grew up in had a "natural influence" on her use of colour.

"I just like to use certain colours together, I wanted it to be bright and textured," she explained.

The video was filmed in a green-screen environment using an Arri Alexa camera mounted on a jib.

"The footage was just of the band on a green background and required a lot of imagination on everyones part to see what the final film would be like," Moross said.

After an initial edit, she spent four days digitally adding textures and videos of surfaces to the footage using Photoshop and After Effects.

"The band were amazing to work with and everyone was really happy with the final film, including me," said Moross. "With such a time-consuming process it can be a real risk with videos like this, the band and the label have to put so much trust into your vision and just rely on you to deliver."

Mecca is the third single to be taken from Wild Beasts' fourth album, released in February.