Greek tragedies will be staged every three years at this traditional amphitheatre that Studio Octopi has restored on the grounds of a college in the south of England (+ slideshow).

Bradfield College has presented a full Greek play every third year since 1890, creating a source of income for the independent school that at one stage faced bankruptcy. However the 150-year-old theatre was forced to close in 2009 for safety reasons and fell quickly into ruin.

Studio Octopi was brought in to bring the theatre back to life and modernise its facilities, whilst still retaining the unique character of the site – a disused chalk quarry.

"From our first visit we were intent on preserving the wild and picturesque setting," explained architect and studio co-founder Chris Romer-Lee, who is also currently working on designs for swimming baths in the River Thames. 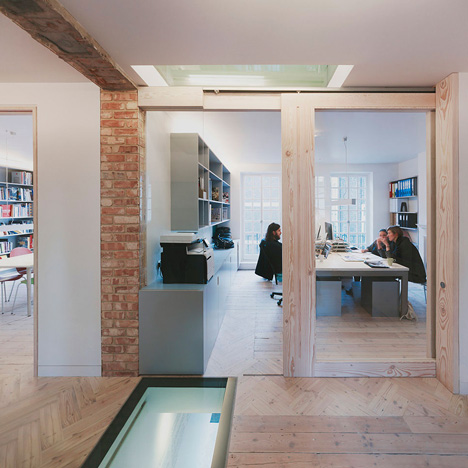 "Our commission was to recover a lost landscape," he said. "We adopted a light touch approach in masterminding a return for this forlorn site."

Looking ahead to how the theatre might be used over the next 120 years, the team planned their renovation around a new entrance, which descends over the chalk cutting and down to the 1000-seat auditorium.

Here, Studio Octopi have added a new raised platform known as the agora – a Greek word used to describe a public space for markets or assemblies.

Built from galvanised steel, this platform extends the granite paving that surrounds the site, offering views out towards the stage. It also wraps around a tree that Romer-Lee describes as "one of the most elegant on the site".

"Tall and graceful, its presence signals the determination to keep nature at the forefront of the architectural proposals," he said.

At the centre of the structure, two new buildings face each other across the circular stage. The first of these is known as the skene, which offers costume storage and supports temporary scenery, while the second is a control hut for stage lighting.

The skene is clad externally with cedar shingles. Cedar slats cover the sliding doors at the front of the building, which support the scenery structure, known as the periaktoi.

"Internally the structure is entirely standardised and exposed, providing opportunity for a cost-effective but honest and striking workspace," said Romer-Lee.

By contrast, the control room was constructed entirely from louvred panels of galvanised steel, resonating with the structure of the nearby agora.

An 85-metre walkway with a black pigmented concrete surface extends around the perimeter of the theatre, over the three upper terraces of the original seating, spanning a 270 degree arch.

"As well as circulation, the walkway offers a peripatetic vantage point during performances," said the architect.

Five separate staircases allow the audience to filter into their seats. Each tread is lit by a strip of LED lighting mounted onto the underside of the tread above, creating the illusion of a floating staircase at night.

"At the height of summer, approaching dusk, the theatre takes on a truly unique appearance," he said. "The overhead sky is viewed through the natural oculus formed by the enclosing trees. As the light drops the theatre lights take over, and the magic of outdoor performance is alive."

The Bradfield College Greek Theatre reopened in June 2014 with a performance of Antigone.