The small English seaside resort of Littlehampton has acquired yet another architectural gem, with this performance space and sheltered seating area by Flanagan Lawrence architects joining projects by Thomas Heatherwick, Asif Khan and Studio Weave (+ slideshow).

The Acoustic Shells were designed by London studio Flanagan Lawrence to facilitate community events and provide residents of the West Sussex town with a scenic resting spot on the edge of a sunken garden, between the town and a beach facing the English Channel. 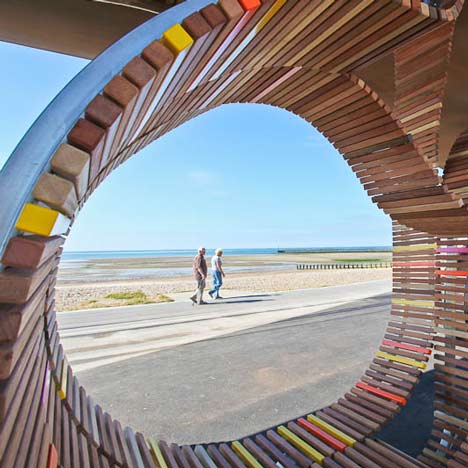 The Longest Bench by Studio Weave

"Prompted by a desire to reinvigorate Littlehampton with its gentility of the early 20th century, the shells materially enhance the public open space of the adjacent greensward and satisfy an essential social need that is not provided elsewhere in the area," said the architects.

The curvaceous shapes of the structures were influenced by the undulating sand dunes found along the local coastline and were produced by spraying concrete directly onto a reinforced mesh framework.

A double-curved form enables the canopies to rise up from the ground without the need for additional supporting pillars or formwork.

Flanagan Lawrence developed the design after winning an architectural competition organised by Littlehampton Town Council in 2012. It called for a "Stage by the Sea" that would "provide a high quality landmark structure forming the focal point of Littlehampton's Greensward".

The design was intended to evoke the traditional bandstands found throughout England, which originated in the Victorian era as stages for musicians who played an important role in entertaining the local community.

Recognising the continued social importance of public entertainment and the democratisation of music caused by digital technologies, the architects hope the structures will encourage amateur or professional musicians to give impromptu performances.

"The Acoustic Shells are a response to this context, bringing back an old ideal, an architecture that can represent sound, and the people that made it," claimed the architects.

The larger of the two structures faces the sunken garden and serves to amplify the sound produced by musicians playing in front of its concave surface.

Behind it, another similar shell has been constructed along the edge of a promenade separating the grassy park from the shingle beach.

This is intended as a shelter where people can sit and listen to the sound of lapping waves reflecting from its inner surface, or as a site for buskers to perform to people passing by along the promenade.

The notion of using curved shapes to direct sound was influenced by the concrete acoustic mirrors that were constructed during the Second World War at Dungeness, along the south coast from Littlehampton, as an experimental amplification system to help detect enemy planes.

Other seaside structures in Littlehampton include Thomas Heatherwick's wavy East Beach Cafe and its sister building, the West Beach Cafe by Asif Khan. London studio Studio Weave also installed the UK's longest bench in the town, which meanders along the coastline.

Photography is by Flanagan Lawrence.

More projects in Littlehampton and Sussex