Fashion designer Zita Merényi has replaced sewing with soldering to create a collection of garments with "scar lines" rather than seams.

Rather than sewing together sections of grey neoprene fabric, Zita Merényi used heat to fuse the edges of the plastic-based material to form clothes for her Provo-CUT collection. 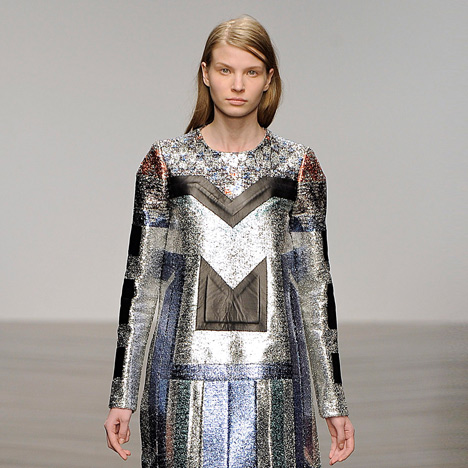 "This is a coat collection where I use soldering instead of tailoring lines, which looks like scars, reflecting on the long term and temporary traces of mankind on the Planet Earth and on their own body, like scarification tattoos," Merényi told Dezeen.

She created a range of oversized coats from different textile patterns, with the exaggerated seams forming linear protrusions across the fabric.

"These scar lines generate very new forms, which are plastic, sculptural, and look beautiful and strange at the same time," said Merényi.

These are worn over intricately patterned satin dresses, which are lacerated with the soldering iron and then painted with bright colours around the edges of the opening.

"I injure the textiles but then I heal up the cut holes with a paint layer," the designer explained.

Each of these incisions is made by hand, which Merényi describes as a laborious but soothing process.

"The green dress I used almost 8,000 cutting lines so this was a slow workflow and very meditative," she said.

One garment has horizontal bands of lines that droop down on each side, while another features vertical strips across the back – both revealing a large portion of skin beneath.

Smaller incisions form diagonal and vertical patterns across the front of two dresses, and leaf shapes covering an ankle-length gown become larger towards the hem.

Neoprene – more commonly used for wetsuits – is becoming a popular choice of material for fashion designers.

Emerging Norwegian designer Damien Fredriksen Ravn used the fabric for both his geometric uniforms for Interieur Biennale 2012 staff and his Spring Summer 2013 collection, while Central Saint Martins graduate Sadie Williams' metallic neoprene garments were nominated for Designs of the Year 2014.