News: a new London gallery housing the collection of British artist Damien Hirst is set to open next spring in a row of converted and extended theatre warehouses by Caruso St John Architects.

The Newport Street Gallery, which will stretch along an entire street in Vauxhall, is being designed by London and Zurich-based firm Caruso St John to house over 2,000 artworks owned by Damien Hirst, including pieces by Francis Bacon and Jeff Koons. 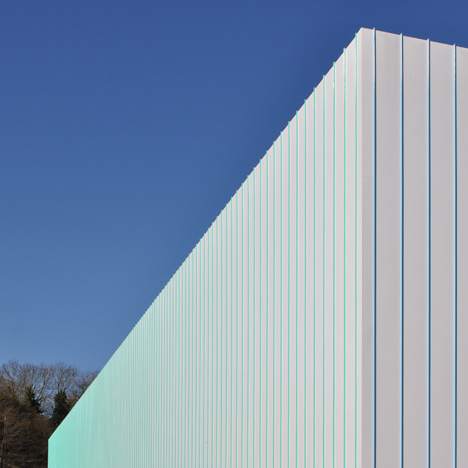 Hirst first announced plans in 2012 for the new venue, which will contain six exhibition spaces, a shop and a restaurant.

The opening was originally planned for 2014, but a spokeswoman for Science Ltd, Hirst's company, has now revealed it won't be until "May or June" next year.

Caruso St John, whose gallery design experience includes the renovation of London's Tate Britain and the Gagosian Paris, plans to renovate three listed buildings and add two new structures, one at each end of the row.

The converted warehouses, formerly used for theatre carpentry and scenery production, will have their first floors moved upwards to create a more logical relationship with the existing windows, creating a series of lofty rooms that can be used as offices.

The two new structures will follow the same proportions and will feature solid facades built from black engineering bricks.

Hirst plans to use the spaces to host a mixture of small and large exhibitions. Other works on show from his private collection will include pieces by British artists Sarah Lucas and Banksy.

"It's my Saatchi gallery, basically," he told the Observer in a 2012 interview. "It's a place to show my collection of contemporary art. It feels bad having it all in crates."

Hirst is now looking to recruit a collection and exhibitions coordinator who will be based at the gallery.