UK charity Art Fund's crowdfunding campaign to save artist and filmmaker Derek Jarman's cottage in Dungeness from being sold to a private owner has been successful.

The Art Fund has raised £3,624,087 to purchase Prospect Cottage in Kent, which was at risk of being sold to a private individual, from the Keith Collins Will Trust.

The house will now be taken care of by arts organisation Creative Folkestone, which will organise a permanent public programme and conserve the building including its renowned wild garden sown on the beach shingles.

For the first time, the public will now be able to view the interior of the house, which was a source of inspiration and creative hub for the artist who bought it in 1986.

Jarman's archive of notebooks, drawings and sketches from the cottage will be on a long-time loan to Tate Archive and available to see at Tate Britain.

According to Art Fund it is the largest-ever arts crowdfunding campaign, receiving over 8,000 donations from the public as well as funding from charities, foundations, trusts and philanthropists. 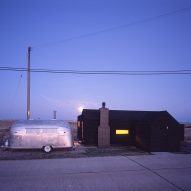 "Securing the future of Prospect Cottage may seem a minor thing by comparison with the global epidemic crisis which has recently enveloped all our lives," said Art Fund director Stephen Deuchar.

"But Derek Jarman’s final years at the cottage were an inspiring example of human optimism, creativity and fortitude battling against the ravages of illness, and in that context the success of this campaign seems all the more apposite and right for its time."

Jarman moved to the house near the Dungeness nuclear power station after being diagnosed as HIV positive. He passed away from the illness in 1994 and bequeathed the cottage to Keith Collins, his close companion, who died in 2018.

The house is where Jarman shot his film The Garden, and his remarkable own garden at Prospect Cottage was the subject of his last book, Derek Jarman's Garden.

Since it launched on January 22, the campaign to save the cottage received donations from 40 countries around the world, with artists and advocates, including Peter Doig, Wolfgang Tillmans and Tilda Swinton, donating artworks and experiences to help raise the money.

The National Heritage Fund gave £750,000. The Art Fund and the Linbury Trust also supported the campaign with grants of £500,000 and £250,000, respectively. Artist David Hockney made a "substantial personal donation," Art Fund said.

The figures in the funding appeal were informed by the scope of work needed on the cottage, as detailed in a heritage statement and conservation report on the building carried out by architectural practice and heritage consultant Purcell for Art Fund.

Dungeness is home to a number of interesting architectural holiday homes, including the Black Rubber Beach House and a world war two pumping station.