Fibre-cement tiles have been used to create a latticed surface on the facade and roof of this house by Belgian studio NU Architectuuratelier (+ slideshow).

Leeuw House was designed by NU Architectuuratelier for a young couple on vacant land in the town of Sint-Pieters-Leeuw, near Brussels. Its shape mimics the area's more traditional brick buildings, but its cladding distinguishes it as a modern addition. 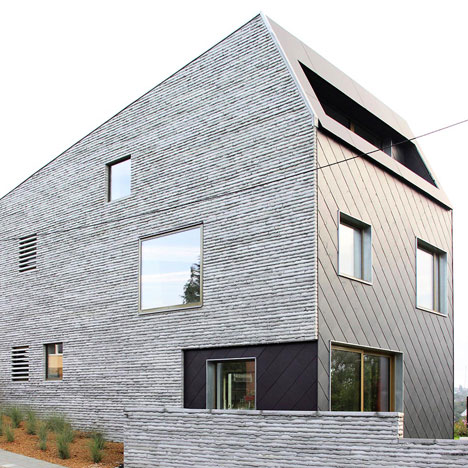 "The slates are quite cheap, and we used them uncoated, which has a nice materiality. They are not as clean as the coated ones – there's a variation in colour," the architects told Dezeen.

The couple asked for an energy-efficient house, so NU architectuuratelier designed it to meet Passive House standards in collaboration with Ghent-based office Robuust, who did the engineering. It is built with an airtight structure that requires little additional heating or cooling.

"The house has underfloor heating, but it hasn't been used yet. The building requires almost no energy for heating," said the architects.

The north facade of the three-storey house is relatively blank, while the south and west facades are almost entirely glazed in order to maximise light and warmth from the sun. This orientation also shifts views towards adjacent fields, and away from neighbouring buildings.

Multiple entrances and exits have been designed to give the house a more dynamic relationship with its location. These include a ramp from the street to the side of the house, doors to the terrace at the back, and external stairs from the first floor down to the surrounding land.

Green doors and shutters have been added to enliven the exterior.

"We liked the idea of adding colour to this grey volume. The colour was chosen together with the client," said the architects.

The house has a garage in the basement and three bedrooms on the first floor. A dining room, kitchen, living room and study have been arranged on half levels between the ground floor and first floor.

A section of the living room flooring has been cantilevered out into the kitchen to provide a cooking surface.

Rather than design a separate circulation area in the house, the architects have created a route through the different open-plan spaces using metal stairs.

"The house is designed like a spiral internal landscape with alternating views to the exterior landscape," the architects explained. "This spiral is made up of spaces with their own quality, but with open relations to each other. As you ascend, the spaces become more private."

Concrete flooring has been used throughout, chosen for its natural ability to soak up heat during the day and release it slowly later, as temperatures drop.

Birch plywood has been used for the kitchen and storage cabinets, and the metal floor plate supporting the top level has been left exposed to double as the ceiling for the ground floor.

"The client wanted an industrial look, so the structure remains visible," said the architects.