London office Studio Octopi has revised its proposal for a floating swimming pool in the River Thames, to become a pontoon of three freshwater pools in a new location beside Temple underground station.

Studio Octopi's initial Thames Bath proposal comprised a floating pool that could incorporate the tidal waters of the river, which will be clean enough to bathe in after the arrival of London's new sewage tunnel – dubbed the Super Sewer – in 2023.

However the team has now unveiled plans for a pool that can be in place much sooner, using either freshwater or recycled rainwater instead of river water.

"We have slightly shifted our emphasis from the vision of 20 years' time to the more practical – how we can get this thing sorted in the short-term," architect Chris Romer-Lee told Dezeen.

"It will be a long time before the Thames water will be clean enough," he added. "So now we're working with marine engineer Beckett Rankine to develop a bespoke pontoon of three pools fed with freshwater." 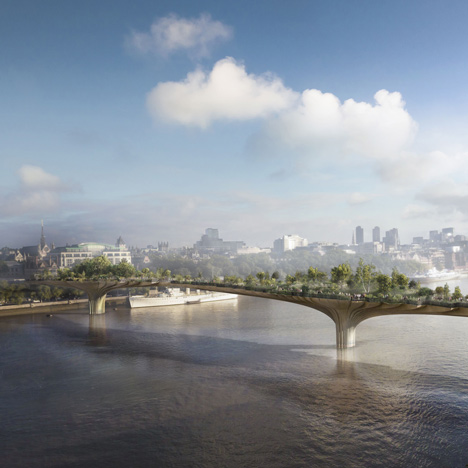 A new location was chosen, as the low tides at the original site beside Blackfriars Bridge would make it impossible to float a pontoon without disturbing the ecology of the riverbed.

"We chose a site on the north bank, one of the forgotten stretches of the London river walk," explained Romer-Lee, whose past projects with Studio Octopi include a restored amphitheatre and an angular house extension.

"It's a strange urban situation that needs some attention," he continued.

"But it is visible from Blackfriars Bridge, Waterloo Bridge and, if it happens, Heatherwick's Garden Bridge. Around 30,000 people are expected to use that bridge each day, and it would be a shame to see them all go north to Covent Garden. What about the north bank? Can't they be given a reason to go down there?"

Three separate pools would be contained within the pontoon, which would be supported by radial arms to avoid creating a pile-up of river debris around the perimeter.

According to Romer-Lee, the pools could also be transformed in the winter months to accommodate other activities, from gyms to social gatherings.

The architect also insists that the original plans won't be abandoned. "We don't see this as a one-off opportunity, these could occur at multiple locations, suiting different demographics," he said.

The Thames Bath proposals will be on show at the Roca London Gallery in the Urban Plunge exhibition, as part of the London Design Festival.