A gridded timber frame extends around the exterior of this office for a cladding company by Austrian studio Heri & Salli, providing space to test facades, as well as to hang sun-screens or grow plants (+ slideshow).

Office Off was designed for cladding company Face of Buildings in the Austrian state of Burgenland. 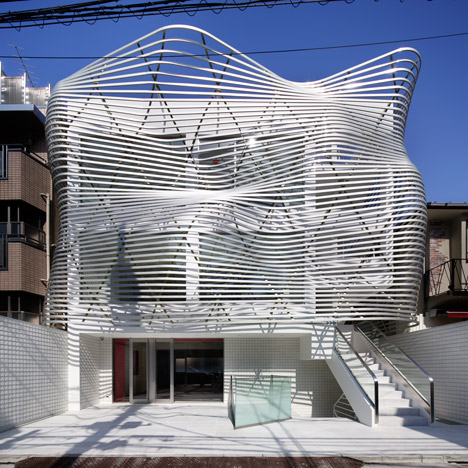 The company asked for a building with a simple character and leisure space, so Heri & Salli extended the frame outside to create a grid that employees can climb on and customise.

"The grid represents the possibility of space – the coordinates of possible expansion," architect Josef Saller told Dezeen. "Architecture should not be a finished, dead monument. It should be a spatial sequence that people start to occupy."

The three-storey office houses approximately 25 workers, who were all consulted during the design process, and has been built to support working and living activities.

In addition to meeting rooms and work spaces, it features a gym, a climbing wall in a three-storey-high entrance atrium, a swimming pool, and an allotment and farm planned for the surrounding land.

"From the beginning, the concept of quality of life and leisure culture had a major part in the planning. The traditional aspect of 'going to work' has received minor consideration," said Saller.

The building's folded form was partly inspired by crumpled paper, and designed to offer a looser sense of enclosure, with strips of glazing closing up the gaps between the walls.

Window boxes punch out of the walls on all sides, providing additional office space and relaxation areas, and framing views of the surrounding forest.

The building was constructed entirely from wood, and the outer shell was built with prefabricated panels and erected on site in five days.

Cedar shingles clad the exterior walls, while the window boxes were covered in Alucobond – a kind of flat aluminium composite panel. The interior was lined in spruce.

Office space spreads across the building's three floors and toilets have been concentrated in the centre of each storey. The ground floor also accommodates a kitchen, while the top floor has two small bunk rooms for resting.

The roof has 85 per cent of its surface covered in photovoltaic solar panels, which provide all the building's electricity, and the heating system is powered by wood from local farmers.

An underground tank collects rainwater that can be used for gardening, toilets and showering, and a system has been installed to automatically open or close windows based on temperature.

Photography is by Paul Ott.