Google has released a video showing the self-flying vehicles successfully delivering a first-aid kit, snacks, dog treats and water to farmers in the Australian outback. 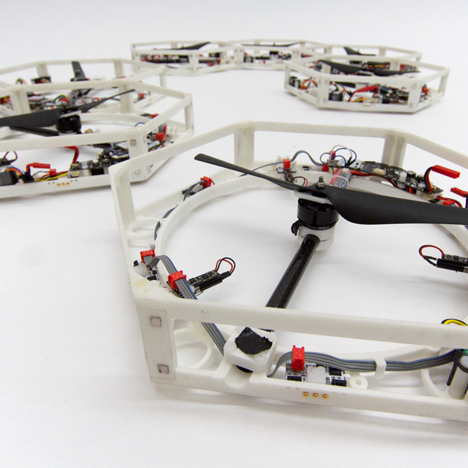 "Self-flying vehicles could open up entirely new approaches to moving goods – including options that are cheaper, faster, less wasteful and more environmentally sensitive than what's possible today," said a statement from the company.

Project Wing has been in development for two years, but remained a secret until now. It is the brainchild of Google X – the tech company's research branch also responsible for the driverless car.

"Throughout history there have been a series of innovations that have each taken a huge chunk out of the friction of moving things about," said Google's "captain of moonshots" Astro Teller in the video.

"Project Wing aspires to take another big chunk of the remaining friction out of moving things around the world."

The white vehicle is shaped like a small plane and is powered by four rotors, with two on each wing.

It can fly horizontally when moving from one location to another and hover vertically around 40 to 60 metres when dropping off goods, while also taking off, landing and resting upright – alleviating the need for a runway.

The packages are attached to a connection point and lowered on a wire, which detaches when the parcel touches the ground and retracts back into the body of the vehicle.

In the first test in Australia, a package of chocolate bars was successfully transported one kilometre and dropped to the recipient. Subsequently, over 30 deliveries were successfully made during the week-long test period.

Google admits that the project is nowhere near ready for commercial distribution, but believes that the model has potential for further development. "It's years from a product, but it's the first prototype we want to stand behind," said Teller in the video.

Further research and testing is required to ensure the technology is safe. Google said the next steps are to teach vehicles to navigate around each other, creating precise navigation for efficient delivery routes and reducing the noise from the machines.

Google is looking for partners to help develop the technology for widespread use and has requested anyone interested to complete an online form.

A Sydney company also launched a book delivery service earlier that year, which it claimed to be the world's first.

The safety of drones and their use in public is still under scrutiny. An installation of the flying machines planned for this year's London Design Festival was cancelled last month over fears for "safety of members of the public".