Hedda Torgersen's Boo lamp features a porcelain or Corian tubular "head" and spindly solid ash "legs" that give it the appearance of being on the move.

Solid metal rods inside the lower legs provide stability. A textile cord or "tail" is made of polyester and available in multiple colours. 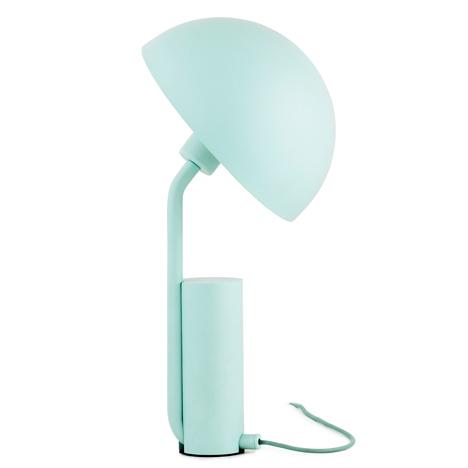 Kaschkasch models lamp for Normann Copenhagen on a cartoon character

"The anthropomorphic design of the Boo lamps appeared from a simple silhouette doodle of a long-legged character," Torgersen told Dezeen. "I built a lot of small models of my drawings, and when it rose from the paper into 3D, it came alive and I quickly got really attached to this character – I couldn’t let it go!"

Torgersen's work starts from the premise that the user's interaction with an object should shape its design expression.

The legs are adjustable, enabling the user to reposition the design, and the lampshade is attached to a seamless metal tube that rotates 360 degrees around an axle so the light's direction can be altered.

The designer hopes that this participation will engender a personal relationship with the object, making it less disposable.

"I want these lamps to trigger people's imaginations and emotions, and I hope they respond with a smile," said Torgersen. "Users can help shape the expression of the lamp by adjusting its legs and head, and bring Boo to life by pressing the switch and turning it on."

"By creating a personal relationship with an object, I think its longevity will be extended," she added.

Materials and finishes have been chosen to play with light and ensure the parts the user touches are as tactile as possible.

"Since the lamp is so simple I wanted the few but different functions to be separated by material differences," Torgersen explained. "Since you have to touch the lampshade to adjust the light direction, it was important that the surface was tactile."

"Both raw porcelain and Corian have a sanded matte finish with a smooth, skin-like texture that is really pleasant to touch."

Even the switch is made into a distinguishing feature – formed from a porcelain dimmer within an ash case and positioned along the cord.

"Since the cord, or "tail", plays such a large part in the lamp's character, I wanted to give extra thought to the switch," the designer said. "Light switches are often hidden or anonymised, but here it is given prominence as a distinct and crucial feature – after all, it's what brings Boo to life."

The legs fold flat and the shade can rotate 360 degrees, so that the Boo lamp can be flat packed and is ready to use straight out of the box. It is available in two sizes.

Hedda Torgersen is in her final year of a Master's Degree in Interior Architecture and Furniture Design at the Bergen Academy of Art and Design.

The Boo lamp will make its UK debut at the 100% Norway exhibition during next month's London Design Festival from 13 to 21 September 2014.