Japanese architect Shintaro Fukuhara has completed a glass-fronted house with a steeply angled roof in Kobe, as a home for himself and his family (+ slideshow).

Named FKH, the house is centred around two double-height atriums with skylights overhead, which frame an open-plan living area on the ground floor and a walkway that connects two bedrooms upstairs. 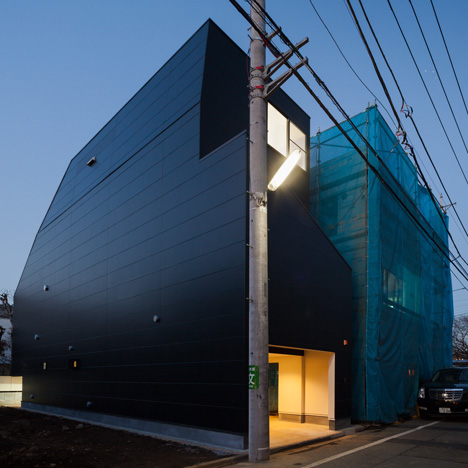 The ground floor is further lit through a glazed wall that displays the interior of the house to the street – an aspect of the design that Fukuhara likens to a "showroom".

"It was important that I took light [into account] when I considered location requirements," explained Shintaro Fukuhara.

"I established the colonnade in the building centre and took in light from four top lights," he said.

The path carved out by the two lightwells cuts 10 square metres out of the upper floor plan, leaving a causeway between the master bedroom at the front of the property and twin bedroom at the rear.

A mezzanine level above the eastern side of the bedrooms makes use of the highest part of the roof space.

The rafters above the second bedroom are partially enclosed with a wooden grille to create a sleeping area for the architect's son, which is accessed by ladder.

Across the walkway, a wooden staircase leads down from the master bedroom to the living area that dominates the ground floor.

A central worktop island helps to visually separate the space, with the living room positioned behind the glass facade and the kitchen running the length of the back wall.

The open-plan layout of the property means there are just three doors. A separate bathroom and toilet located off this central area use two, while a third in the glass facade acts as entrance point.

The staircase and storage areas are finished in a pale wood that tones in with the oak flooring to further unify the space.

A small strip of contrasting flooring in the hallway marks the transition from inside to outside.

Externally the building is clad with galvanised steel sheets, creating a dark surface that contrasts with the white walls and exposed wood of the interior.

Photography is by Matsumura Y.