This wooden shed with one thatched wall and one metal-mesh wall is designed by Guinée*Potin Architectes to host a newly invented sport that borrows from football, table football and squash (+ slideshow).

Paris studio Guinée*Potin Architectes designed the building as part of Voyage à Nantes, an arts trail through the French city that this year has the theme "playgrounds". 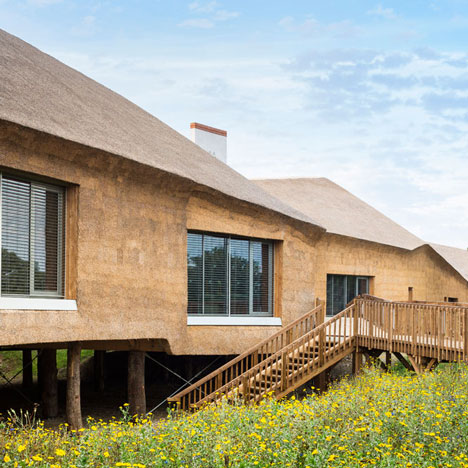 This prompted the design of a venue for "footcheball" – a newly created game that requires a long and narrow confined space.

According to the architects, footcheball involves two equal teams each made up of two to four players, who must try to score as many goals as possible in ten minutes by kicking a ball into one of two wooden boxes fixed to the end walls.

The architects designed their building around two imaginary teams, known as FC Urbanch and FC Naturch. This prompted one side to be clad with a natural material, the thatch, while the other is covered with metal fencing wire.

"Once upon a time, a great battle was opposing the FC Urbanch to the FC Naturch, and no one knows when or why it started. But one day it was decided to get rid of this hatred and to square this up playing a new game," said architect Herve Potin.

"This place gets the characteristics of each team: the thick coat of thatch on one side, the cold metal mesh on the other side. Hot and cold, grey and yellow, nature and urban," he explained.

The structure, described by the team as the Chaum Room, is located beside the river on Île de Nantes.

"Between the city that emerges along the dock, the Loire and the wild park of the island, the site is the meeting point of built space and nature," said Potin.

The gabled profile of the building was based on the archetypal French farmhouse. Nine wooden column-and-beam structures frame the outline, and are infilled with wooden panels to provide the interior walls and ceiling.

The 28-centimetre-thick thatch clads the southern edge to protect the interior from harsh sunlight, while the mesh-covered elevation allows light and fresh air inside, and permits views of the Loire.

The building was prefabricated before being transported to site. Metal screws give it light foundations, allowing it to be dismantled without damaging the ground surface.

Wooden panels line the base of the interior, creating a surface that a ball can bounce off quickly.

Photography is by Martin Argyroglo