London Design Festival 2014: this copper pendant light by London-based Paul Crofts Studio alludes to pastry-cutting utensils, a reference to the patisserie it was originally designed for.

Paul Crofts created the lamp for the Pastry Parlour interior he designed in London and has now put the design into production. 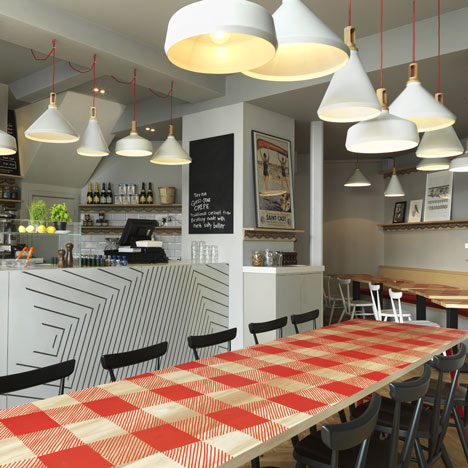 The designer named the lamp Cu29 after the chemical symbol and number for copper used on the periodic table of elements.

"The Cu29 prototype in the patisserie was very well received, encouraging me to put it into production," Paul Croft told Dezeen. "The light makes reference to utilitarian utensils used in the cutting and forming of pastry, which were classically made of copper."

The light is made from spun aluminium and spun copper with a white powder-coated finish to the inside and top, and laser-cut steel support struts.

"Its form is a simple twist on a classic shape by way of upturning the shade," said Croft. "The secondary spinning to the top then reflects the light back, creating a layered effect."

To enable cost-effective and energy-efficient production in the UK, the lamp was designed to use as few elements as possible.

All the components were designed around the capabilities of a single manufacturer to limit transportation requirements.

"The simplicity of the construction process is especially relevant when manufacturing in the UK and trying to produce a commercially viable product," Croft said.

"The light has been designed with simplicity of assembly in mind and with the minimal number of parts with its construction detail visible from the outside. Even the form of the shade is designed to stack in order to minimise transport from the factory."

The Cu29 pendant light will launch at Super Brands, part of Tent London, from 18 to 21 September at the Old Truman Brewery, Hanbury Street, London E1 6QR.