The owner of Y Duplex Penthouse commissioned Pitsou Kedem to renovate the 160-square-metre apartment, with a brief to create lighter, more generous spaces, and make room for a combined study and office on the top floor. 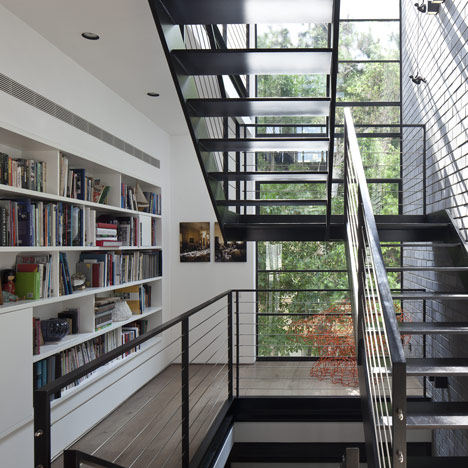 "It was a small yet complex project," said the architects, whose other projects include a penthouse with an infinity pool and a six-storey townhouse with a black steel staircase. "How would it be possible to install meaning and architectural values to a rooftop apartment in a standard, uninspired multi-storey building?"

The architects have reconfigured the apartment to create an open-plan kitchen, dining room and living area on the bottom floor, and added large sliding doors that open on to a 40-square-metre balcony.

"The border between the interior spaces and the balcony is almost totally blurred by a thin glass panel system," they said. "The use of the same poured terrazzo flooring inside and outside also contributes to this feeling of continuity."

New thin steel columns and large ceiling beams have been added to the open-plan space to support the floor above, and a textured concrete wall has been left exposed at the back.

"The raw materials and the attempt to create an architecture that was both unfashionable and timeless is complemented by the books and pieces of art hung throughout the apartment," said the architects.

The upper level has a master bedroom, bathroom and shower at one end, and an office, study and second shower room at the other end.

A new folded steel staircase provides access to the top floor, and rooflights have been installed above it to bring in more light to both levels of the apartment.

A void between the upper and lower level has also been added next to the upper stair landing, in order to increase light between the two floors.

Two screens featuring moveable timber slats have been added at either end of the stairwell on the top floor, to conceal or reveal views between the shower room and the study.

"The space created by the new stairwell creates a dramatic architectural cross-section through the apartment, linking the different levels and allowing natural light to penetrate the building," said the architects.

The bathroom has been designed as a calming space in the apartment, combining white paint, pale grey stone, and thin-frame sliding doors that open on to a small, secluded terrace.

"Despite the fact that the apartment has a small area, it feels large and spacious," said the architects. "The wide, open views out to the scenery and in between the neighbouring buildings create the feeling of a light and airy space."