After many years of trying to fully soak pigment into pieces of timber, Yael Mer and Shay Alkalay of Raw Edges finally found the right combination of dye and wood types to obtain colour all the way through the sections. 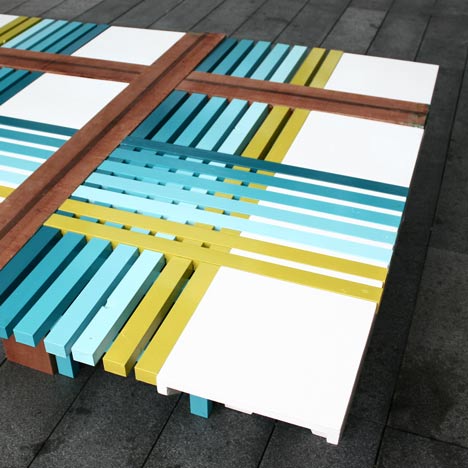 Bench by Raw Edges for Bench 10

"We had to find a wood that would absorb the stain properly," Alkalay told Dezeen. "We tried over 20 different species until we realised which one would work best for us."

Finally settling on jelutong timber, the designers arranged the natural and coloured blocks of wood into patterns.

Pieces were then glued together with the grains facing vertically – similar to the make up of a butcher's block.

"Usually a butcher's block has the end grain facing up, because it's the stronger surface of the timber to withstand chopping meat with a big knife," said Alkalay.

These large blocks were then shaped in a computer numerically controlled (CNC) machine to form table tops, shelves, stools and other smaller objects for a collection titled Endgrain.

The resulting forms have variation across their surfaces, with curving sides revealing different pattern effects to the flatter tops.

"The project is about how the three-dimensional shapes of the objects affect the pattern of the timber," Alkalay said.

The designers were keen to show that the patterns weren't created using marquetry or veneer, so the table top is slightly domed to demonstrate that the colours run all the way through the wood.

Raw Edges' idea for the collection came after failed attempts to permanently stain floors in the stores of British fashion designer Stella McCartney.

"We used to stain the oak parquet, but with high footfall especially at the entrance to the shops the colour would fade away after a year or so," said Alkalay. "We wanted to find a way to keep the colour permanent."

The collection was launched to coincide with Brussels Design September, an annual month-long event in the Belgian capital.

Endgrain was commissioned by a private collector, who will keep the pieces after the exhibition at his Senne gallery space.

Raw Edges plans to extend the collection with new designs over the coming years.

Photography is by Max Creasy.