The haphazard stitching usually concealed on the back of embroidered rugs is integrated into the decorative surfaces of this collection created by London studio Raw Edges for Spanish brand GAN.

The studio led by designers Yael Mer and Shay Alkalay created the BackStitch collection for Valencia-based textile brand GAN, which is part of the Gandiablasco group.

The design focuses on the process used to embroider rugs and takes advantage of GAN's women's development project in India, where a team of female artisans produces hand-embroidered pieces using manual looms.

Raw Edges was interested in switching the focus from the intricate patterns associated with traditional embroidery to the messier, more random appearance on the reverse of the textiles.

"BackStitch focuses on that ambiguous and irregular universe of stitches, without which the front side, designed to be seen, could not exist," said the designers.

"What seems chaotic has its own language and adds a new value, a new intention to traditional craftsmanship."

The unique approach used to design and produce the rugs earned the collection a place on the longlist for the Dezeen Awards 2019.

It will compete in the homeware design category with products including a rug featuring fluffy wool loops that is intended to feel like pebbles underfoot.

To create the BackStitch collection, Mer and Alkalay examined the patterns created on the back of rugs and textiles during the traditional embroidery process.

Most embroidery techniques involve stitching patterns onto fabric using a needle and thread, which can result in knots and criss-crossing threads on the reverse.

Raw Edges created three designs based on how different embroidered patterns or images look on the back of the fabric. The collection represents a progression from a more ordered and familiar pattern to a fully abstract design. 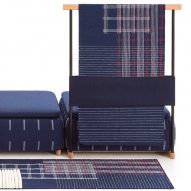 The first rug in the series is called Thin, and features a classic linear pattern that is embellished with a band of haphazard stitching in contrasting colours along one edge.

The second rug called Thick has a denser pattern of randomly positioned lines that create a more tactile and layered composition.

The final rug is titled Composition and is the most complete expression of the concept. Its design combines linear elements to create blocks of colour and pattern that are overlaid with messier stitching.

"It produces an explosion that shows the intention, the complete work," the designers added. "It is almost a piece of art, and it can be used both as a rug or as a tapestry on the wall."

All three rugs are made of pure wool on manual looms and are available in two colourways.

Mer and Alakalay founded Raw Edges after graduating from the Royal College of Art in 2007. The studio is known for its exploratory approach to materials and form, which results in furniture, installations and products with a playful character.

Raw Edges previously created a carpet collection for Persian company Golran with a pattern that appears to change colour when viewed from different angles.

Its other projects include an installation of spinning lamps and a cluster of concrete armchairs that provide street furniture in east London.