Danish firm Henning Larsen Architects designed this wedge-shaped museum near Aarhus with a planted roof that rises from the sloping landscape to create a site for picnics in summer and sledging in winter (+ slideshow).

The new home for the Moesgaard Museum was conceived by Henning Larsen Architects to house a collection dedicated to prehistory and ethnography that was previously accommodated in a nearby manor. 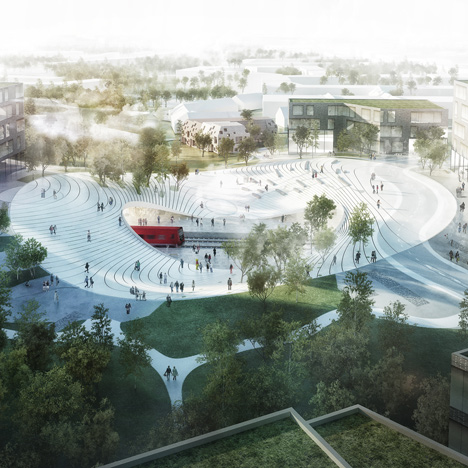 Positioned on the side of a hill in the suburb known as Skåde, the building is partly submerged in its rural site and features a roof that slopes more steeply than the terrain to create an angular section.

The roof is covered in grass, moss and flowers, and interrupted by apertures that form terraces, allowing natural light to enter exhibition spaces arranged over three storeys.

Towards the top of the roof, a horizontal section juts out to form a lookout point offering vistas of the surrounding countryside and Aarhus Bay, from which the museum's profile is visible.

During the summer months the roof can be used for picnics, barbecues, lectures and other events such as the traditional Midsummer's Day celebrations. In the winter, the snow-covered slope will provide an ideal site for sledging.

Inside the building, the terraced layout is intended to reference "archaeological excavations gradually unearthing the layers of history and exposing lost cities."

The museum's entrance leads to a 750-square-metre lobby that spans the entire building and contains a ticket desk, cloakroom and cafe situated around the wide central staircase.

The staircase connects the lobby to exhibition spaces on the levels above and below, and also houses a display of seven anatomically accurate models depicting various stages of human evolution.

A glazed section of the wall adjacent to the staircase fills the lobby with daylight and incorporates doors that open onto a large terrace carved into the angled roofline.

A permanent exhibition dedicated to Denmark's Viking history is situated in the lower galleries, which feature 12 metre ceilings that can accommodate large-scale exhibits including burial mounds and sets recreating parts of Viking towns.

On the level of the foyer, a large multipurpose hall described by museum director Jan Skamby Madsen as "the biggest of its kind in northern Europe" can be used to host temporary exhibitions and conferences or other events.

Henning Larsen Architects has also recently been appointed to oversee the development of a train station for a new city near Copenhagen and to deliver a town hall for a Swedish city that's being relocated after mining caused the ground below to be destabilised.