The Son La Restaurant, which won the hotel and leisure category at the World Architecture Festival earlier this month, was designed by Vietnamese firm Vo Trong Nghia Architects for a new hotel resort in the country's picturesque Son La Province. 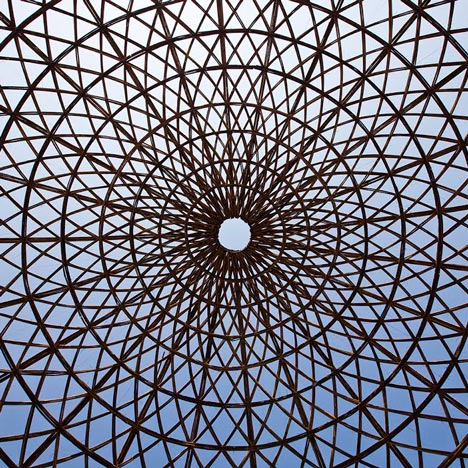 Precarious cliff roads provide the only access to the site from Hanoi, the nearest city, so the architects had to develop a design that could be easily constructed by local builders using materials that are readily available nearby.

"Due to difficult terrain, Son La is only accessible from Hanoi by a seven-hour car trip," said the architect team. "With this situation, local bamboo and stonework were selected to be the main materials of the building."

The restaurant's layout is defined by eight pavilion-like structures with stone walls, which frame the sheltered open-air dining area. Varying in size, these small buildings each contain either one or two storeys.

"To adopt to the tropical monsoon climate – with a wet season that is hot with high humidity and strong rains, and a more temperate but still hot dry season – the building is composed of separate buildings and an open-air dining hall to supply both contained air-conditioned rooms and comfortable external dining," said the team.

A local bamboo known as luong, which can grow to a height of eight metres, was chosen for the restaurant's main structure, creating a criss-crossing grid that the architects describe as being "like a bamboo forest".

The material was prepared using a traditional Vietnamese building method, which involves soaking it in mud and then smoking it. Lengths are then held together using dowel nails and rope.

The stone used for the surrounding stuctures was sourced from within a ten-kilometre radius.

The roof is covered in thatch, made waterproof with a layer of transparent plastic.

Son La Restaurant is the first building in the proposed hotel development, which will also include a conference centre and cafe.

Stepping stones lead across a pool of water at the building's entrance, and hundreds of peach trees have been planted in the surrounds.

Vo Trong Nghia Architects won awards in three categories at the World Architecture Festival 2014 in Singapore. The firm's residence with trees growing on the rooftops was named best house, while its chequerboard university building topped the education category for future projects.