A spiky red wall reminiscent of a cartoon explosion is one of two installations that French artist Didier Faustino has inserted in the grounds of a 1950s villa designed by architect and sculptor André Bloc (+ slideshow).

Didier Faustino is the latest in a series of artists invited by gallerist Natalie Seroussi, the current resident of Villa André Bloc, to create interventions in and around the architectural structures built by Bloc in the gardens of the residence he designed in Meudon, near Paris. 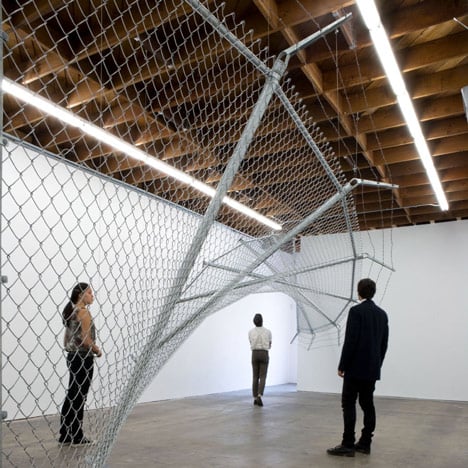 Faustino, whose previous sculptures have included a kissing clamp and a shipping-container tower, created two temporary additions at the villa – one in architecture, and one with lighting and sound.

The first is entitled This Is Not a Lovesong, after the Public Image Limited hit song of the 1980s. Comprising a red-painted floor and two adjoining red walls, the installation frames the entrance to an existing concrete folly.

The artist describes the piece as an architecture "framing a space waiting to be inhabited".

It was built from brickwork with unrefined mortar joints, creating a texture that is visible through the paintwork. The bright red colour creates a striking counterpoint to the green tones of surrounding trees and bushes.

"This conjectural proposal reflects André Bloc's architecture," stated Faustino. "In one liberating movement, Bloc limits the place of the body in his architecture. That is the history of this place."

"My proposal is therefore a sculptured event surmounting the sculptured habitat."

The second installation, Nowhere Somewhere, occupies another of Bloc's structures. An array of neon arrows highlight all of the various exits, aiming to disorientate the visitor, while three whispering voices encourage them "not to trust architects".

Past artists invited by Seroussi to create installations at Villa André Bloc include Ernesto Neto, Mathieu Briand and Phill Niblock.

Photography is by Felipe Ribon.