News: New York's Museum of Modern Art (MoMA) has acquired a kit for building and programming a simple games console and four other DIY electronics products for the museum's collection of "humble masterpieces". 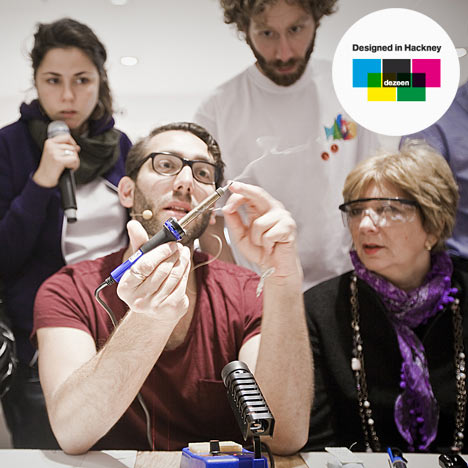 Each relies on a degree of user interaction or input to function, such as assembling or programming the devices to perform various tasks or create sounds, with a strong focus on teaching simple electronics and programming at the same time.

"While all five might be small in scale, their significance for contemporary design – and the world at large – knows little bounds," said Antonelli in a post on MoMA's blog.

"These objects reflect the deep and central role technology and interface design now play in education, production, and our everyday lives. In their own unique ways they allow audiences – artists, designers, and active maker-culture enthusiasts, pros, children, and amateurs – to engage with the processes and final products that are usually the preserve of electronic engineers."

The acquisition is unusual because none of the items are finished products – the process of making and adapting them is a fundamental part of their design.

The DIY Gamer Kit by London studio Technology Will Save Us is designed to help people of all ages learn basic electronics and programming skills.

Launched last year, the kit comes as a box of components that the user assembles into handheld gaming device and then programs using the instructions provided.

"It's not something pre-made by a company that then just gets sent to you," Technology Will Save Us cofounder Bethany Koby told Dezeen. "The process of using the gadget can only happen if you decide to make it yourself. So inherently some skills and a new relationship to technology – and to the object – will inherently happen because of the way that we've designed that experience."

Similarly, Arduino is an open-source electronics platform that includes a programmable microchip housed on a small circuit board and software that allows users to create interactive devices.

Makey Makey is also described as an "invention kit", and turns any object into a touchpad when connected to the internet using the wires included.

Created by London designer Yuri Suzuki and company Dentaku, Ototo works in a similar way but turns objects into synthesisers.

Suzuki also created the Colour Chaser, a small vehicle that travel along lines drawn in felt-tip-pen and turns coloured scribbles into music.

"Museums specifically focusing on design as a discipline are looking much wider than the traditional outputs of objects," said Koby, "because that doesn't define design anymore."

All five objects are also aesthetically designed to make it easy to understand how they are put together and how they function.

The pieces will form part of a collection that the museum calls "humble masterpieces" – which also includes the Post-it Note and the Bic Cristal pen – first brought together and displayed for an exhibition of the same name in 2004.

"As design curators, we have an instinctive response to designs we find compelling, and when that feeling survives the passing of time, we know we're on to something worthwhile," said Antonelli. "We believe our new acquisitions will withstand that test."

"Museums are looking at the real context of what is happening in the design world, and there are many facets that designers are now using their skills to affect," said Koby. "Sharing the broadest parameters of what design is in the world is really what design museums should be doing."