A grey slate terrace that extends from the back of this mountainside property by Frankfurt studio Ian Shaw Architekten juts over the valley below (+ slideshow).

Ian Shaw Architekten set the two-storey house, named Villa S, into a slope above the town of Schriesheim in Baden-Württemberg, south-west Germany. 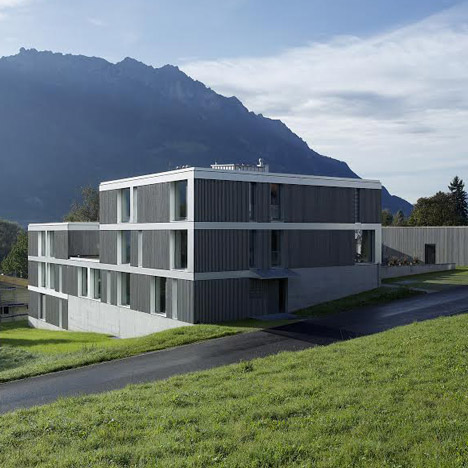 Housing Estate Papillon sits in the shadow of a mountain range

The balcony positioned to the rear of the building takes advantage of views of the Black Forest, Rhine Valley and the ruins of a nearby castle, while the lower storey containing four bedrooms is sunken into the hillside. "The pavilion-like configuration engages with the landscape and the elements," said Shaw.

Villa S has a white cast in-situ concrete shell with "a massing composition that generates a strong sense of place and dwelling, rooting the villa in its topography."

"The base section is articulated as a heavy concrete cuboid, embedded in the landscape – an extension of the earth, almost," said the architect, whose previous projects include a German lake-house with one side open to the water.

By the entrance to the property, an overhanging roof has a large opening in the centre that lets daylight through the heavy structure. The remaining sections of concrete protect a strip of ground leading up to the wooden front door. "A seemingly gravity defying rectangular aperture, emphatically defines the main entranceway," said the architect.

Small angular spotlights with aluminium surrounds are set into the underside of the concrete structure and light the porch at night, aiming to compliment the building's "pared-back aesthetic."

A section of glazing with a timber surround is set into the wall of the upper storey above an external stairwell that leads to the ground floor. It gives a view through the living area and out of a large glazed wall on the other side of the house.

The front door leads into the open-plan living space on the upper level surrounded on three sides by sections of timber-framed glazing. To the rear of the area, a set of sliding doors in the glass walls open onto the terrace that is overhung by a 2.6-metre section of the white concrete roof.

By the entrance, a flight of internal stairs connects to a set of lower-storey rooms embedded into the side of the mountain. Two south-facing bedrooms and en-suite bathrooms are "cocooned" in the lower block beneath the terrace.

The rooms have floor-to-ceiling glass walls that face out onto a patch of greenery and a set of white stepping-stones that provide a route down the hillside.

To the front of the space, off a central hallway with smooth grey walls, there are two additional bedrooms, a utility room, a bathroom and storage space.