Beijing-based design team Impossible Technology has created an electric bike that can be folded away and carried in a backpack (+ movie).

The Impossible bicycle's frame is built using circular components instead of a single horizontal girder common in other electric bike designs. 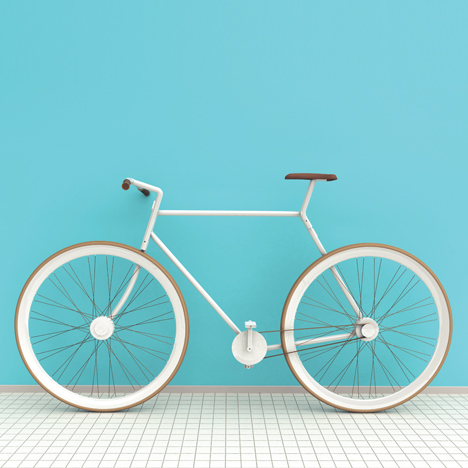 Kit Bike by Lucid Design packs into a bag

"The circular design of the frame helps to ensure that the bike spreads the weight equally across the frame," said Impossible Technology.

Each circular frame is made out of carbon fibre to ensure the bike is strong as well as lightweight, and connects together using a central steel box to further enhance durability.

"This steel box can easily bear the weight of the rider and withstand the shocks associated with everyday use," explained the designers.

The saddle and carrying case are combined to keep the bicycle compact and easy to carry, while handlebars are extended upwards and can be adjusted to the rider's needs.

A small disc motor powered by ten rechargeable batteries allows the bicycle to travel up to 12.4 miles per hour for 45 minutes, or at a steady pace for up to 15.6 miles.

Later incarnations of Impossible will feature removable covers available in a range of colours and other customisable parts such as wheels and handlebars.

Other bicycles recently featured on Dezeen include one by luxury car manufacturer Pininfarina styled on 1930s vehicles, a folding bike that can be wheeled when folded and electric bicycles by French designer Philippe Starck.