This concrete oval, designed by Parisian architect Philippe Prost to be "the colour of war", stretches out across the site of one of the world's largest French military cemeteries to commemorate the centenary of the First World War (+ slideshow).

Philippe Prost was asked to design the memorial for the military cemetery of Notre Dame de Lorette, which is located in the countryside outside the northern French village of Ablain-Saint-Nazaire. 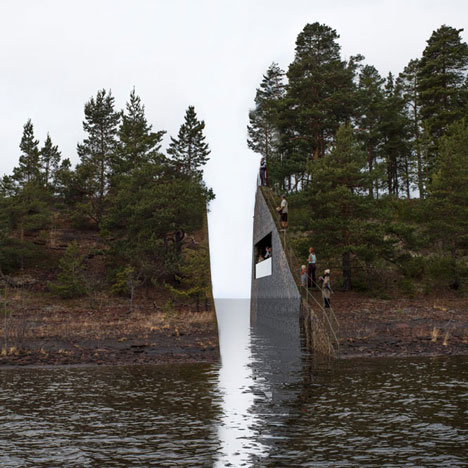 Over 40,000 war casualties – predominantly from the World-War-One battlefields of Nord-Pas-de-Calais, but also soldiers of World War Two, the French-Indochina and French-North African conflicts – are buried in the mass grave site.

The Ring of Remembrance memorial is a 328-metre oval-shaped loop constructed from panels of cast concrete and inset with 500 copper-toned panels.

Three-metre-high bronzed stainless-steel panels splay out from the concrete structure and are inscribed with the names of the 579,606 casualties of the war, which famously began on 28 July 1914 and ended just over four years later.

The names are arranged in alphabetical order, irrespective of nationality or rank, so that they are "united now and forever in their common humanity."

The ellipitcal monument encloses an area of grass in its centre, and is flanked by vast grave sites lined with rows of white headstones, ossuaries and agricultural land.

"The ring is synonymous with both unity and eternity: unity because the names now constitute a sort of human chain; eternity because the letters continue without end, alphabetical order prevailing over all distinctions of nationality, rank or creed," said Prost.

A trench with gently sloping sides leads below the concrete ring to the centre of the monument, where a paved walkway runs around the internal perimeter.

Small round lights set into the paving slabs reflect off the gilded panels at night to emit a warm coppery glow.

The concrete ring cantilevers over 60-metres across this dip in the terrain "to remind us that peace will always remain fragile."

"On the outside, a ribbon of dark concrete, the colour of war, balances on the hill that overlooks the plains of Artois," added the architect.

Two slim openings in the concrete structure give views in one direction towards the plain of Artois and in the other towards the cemetery.

The monument was inaugurated on 11 November, the date now known as Armistice Day.