News: graduate designs for an industrial landscape overlaid with scenes from Winnie-the-Pooh and a bathhouse set into a volcanic quarry are the big winners at the RIBA President's Medals Student Awards this evening.

The Silver and Bronze medals, which are awarded annually by the Royal Institute of British Architects (RIBA) to Part I and Part II architecture graduates, have this year been won by students at the Bartlett School of Architecture and Kingston University. 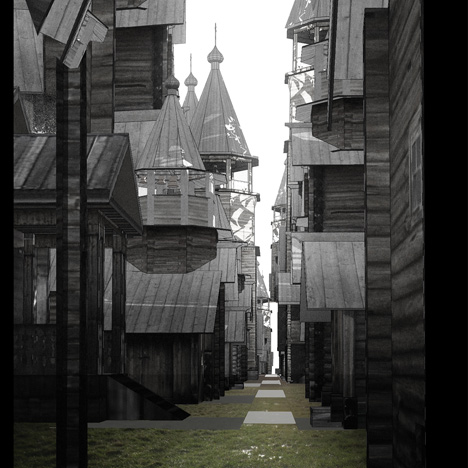 Nick Elias is the recipient of the Silver Medal for his project Poohtown, which reimagines the post-war town of 1920s Slough, England, using the fictional scenes of AA Milne's classic tale to create architecture that promotes happiness.

"1920s Slough is revisited to capitalise from the economy of 'happiness' as an alternative industry, using Winnie-the-Pooh as a metaphorical protagonist," said Elias, speaking to Dezeen last year.

In Elias' hand-drawn images, the city is transformed from an industrial sprawl into a fictional wonderland filled with familiar characters and friendly architectural structures, designed to appeal to human emotions.

The Bronze Medal goes to Kingston graduate Simon Dean, whose final degree project proposes a bathhouse set amongst the rocks formed out of the solidified lava from the 1944 eruption of Mount Vesuvius.

Entitled Flow, 1944, the project includes a series of models that imagine how the passing of time could have shaped the form and size of the bathhouse, which appears to have been carved out of the landscape.

"A bathhouse emerges from a quarry, carved from the flow spewed by the volcano's last eruption," explained Dean in his project description. "A trail through deserted lands and timid orchards, a shunned landscape turned to wasteland, tracing the river of lava up to its source; the volcano rests below, its breath heating rock and water."

The Dissertation Medal was also awarded this evening to the student judged to have carried out the best research project – Jasper Ludewig from the University of Sydney for his paper Made Ground: A spatial history of Sydney Park.

RIBA President Stephen Hodder congratulated all of the winners for their talent and hard work, which he said "reminds us all of the important part that architecture plays in creating a better world".

"Without a doubt, the projects deserve to be rewarded not only for their accomplished words, images and models, but also for revealing the intellectual and experiential dimension architecture brings to daily life," he said.

The nominations included projects from 317 schools of architecture located in 61 countries. The winners and commended entries will go on show at the RIBA Practice Space at 66 Portland Place tomorrow.