The video was created using ferrofluids - tiny magnetic particles suspended in liquid - which director Tim Dee and his team at Rabbit Hole, together with Blackbox, added to a small tank of water and manipulated using magnets.

"We used two types of ferrofluid," Dee told Dezeen. "One floated and the other sank creating this alien landscape. Magnets of different strengths were used to push and draw the ferrofluid causing it to connect and disrupt the environment."

Because the oil-based ferrofluid wouldn't mix with the water in the tank, the force of the magnets caused small droplets to form, replicating how the very first biological cells could have evolved.

"Spheres form of one fluid inside the other" Max Cooper explained. "[These are] basic cell-like structures. All living cells today exhibit this same natural property and it’s possible that the first cells arose through the sorts of processes shown in the video."

Origins is part of a larger project by Cooper called Emergence, a live audio-visual performance that represents various stages of life, from its early beginnings to human existence today.

"I wasn’t sure how to approach the origins of life section," Cooper said. "But when I saw the first tests of Blackbox's ferrofluid work I realised that we were looking at something fundamental – how natural materials and forces can produce the first sorts of structures needed to initiate early life."

The final video features up to three shots at the same time, which Blackbox rotated and stitched together to create different varieties of movement. Camera zoom and tracking were added digitally.

"We’d seen a few videos using ferrofluid that interested us, but most of the videos we'd seen gave us a science class feeling," Dee said. "We wanted to see if we could use it in a more creative way and possibly tell a story."

The numbers next to each droplet represent the complexity of the organisms as different cells combine throughout the video. 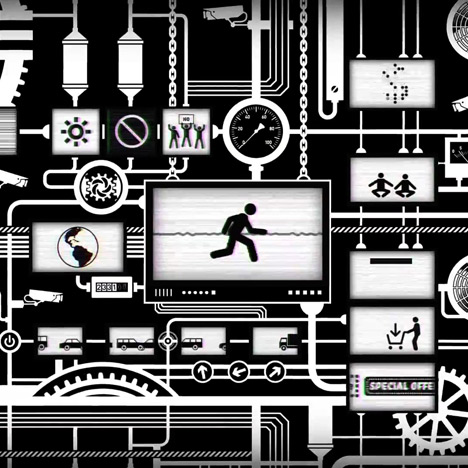 "The way the fluid moves and morphs within its environment is an abstract depiction of lifeforms evolving in their habitat," Dee explained. "The numbers signify that change. The more complex the life form the higher the number."