The new 13,000-seat home stadium for Los Diablos Rojos del Mexico, which translates as the Red Devils of Mexico, will feature a lightweight steel roof with three pointed ends, designed to reference the three-pronged spear synonymous with the devil.

Designed by Mexican architects Alonso de Garay of ADG and Francisco Gonzalez-Pulido of JAHN, the arena will be located in Mexico City's Magdalena Mixhuca, the main site of the 1968 Olympic Games. 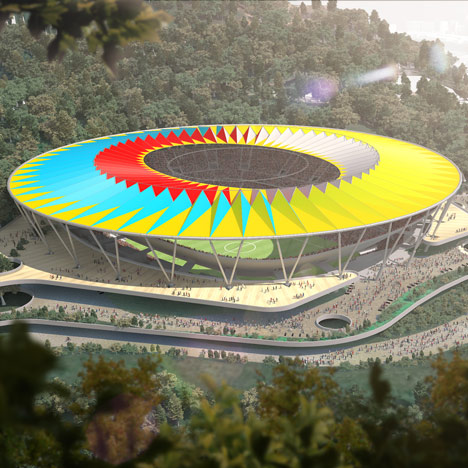 The grand roof will be wrapped in PTFE textile to create a fabric surface. According to the architects, it will be "sharp, translucent, luminous and dynamic".

This structure will be supported by truncated pyramids clad with indigenous volcanic rock, likened by the architects to the components of "an ancient Mesoamerican temple".

"Our guiding concept was to establish the duality between pre-Hispanic Mexico through the base and contemporary Mexico through the roof of Estadio Diablos, which blends tradition, innovation, austerity and technology into one space," said De Garay.

Beyond the entrance, a ring of circulation space will lead to the sheltered seating stands. There will also be additional seating provided by a great berm – a raised bank overlooking the action.

Public plazas will be created at the northern and south-eastern corners of the complex, and there will also be gardens at the south-west end of the site.

"Estadio Diablos is more than a stadium, it is Mexico's ballpark," he continued.