"Less is more" and "form follows beauty" are some of the famous architect quotes reimagined as roadside advertisements in this set of illustrations by Italian graphic designer Federico Babina.

Federico Babina's Archiquote poster series takes 13 quotes from some of the 20th century's most prolific architects, from Alvar Aalto to Frank Lloyd Wright, and transforms them into colourful signposts. 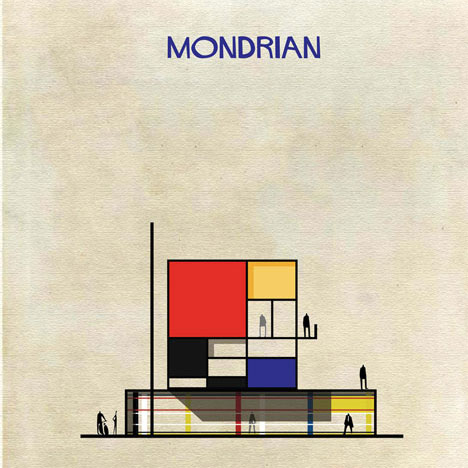 "The idea behind the project was to put words into manifest examples of concepts and aesthetics of some architects, as advertising signs that relate architectural thought," explained the designer, whose recent works also include silhouettes of architects framed by iconic windows.

"Billboards evoke a Las Vegas of architecture where the phrases guide us to understand a little more the idea hidden behind the work done with volumes and space," he added.

The first and most famous quote depicted is "less is more" – made famous by German-American architect Ludwig Mies van der Rohe and widely considered to be the motto of minimal design.

Mies actually adopted the quote from industrial designer Peter Behrens, who he worked with on the AEG Turbine Factory in Berlin between 1907 and 1910. "I heard it in Behrens's office for the first time... he meant it in another way than I use it," he later said.

"'Less is more' is an architecture of Mies van der Rohe as much as the forms of his buildings," said Babina. "[It is] an architecture made of words, a slogan that contains in three words his architectural concept."

The next illustration in the series portrays the quote from Brazilian architect Oscar Niemeyer, "form follows beauty". The architect used the line to set himself apart from fellow Modernist architect Le Corbusier, who more famously said that "form follows function".

Le Corbusier also features in the series himself, with the lesser-known statement "the styles are a lie". These words are illustrated with icons commonly associated with the Swiss-French architect, from his Modulor Man to his circular horn-rimmed glasses.

The well-known quote from Walter Gropius, "architecture begins where engineering ends", is overlaid with images of the Bauhaus School he founded, while the words of Arne Jacobsen and Alvar Aalto are peppered with the forms of their furniture designs.

"These 13 illustrations mix, intersect and integrate aphorisms and shapes in a communicative game," said Babina.

"The architects find in words an additional means and a valuable tool to explain and express their work. They become part of the architecture with the same explosive power of a built volume."

Babina trained as an architect before taking up graphic design. His illustrations also include iconic buildings transformed into classic movie posters and works from art reinterpreted as architectural drawings.