An elephant, giraffe and crocodile are among the animals that Federico Babina has illustrated in these zoomorphic floor plans.

Named Planimals, they are the latest series of architectural illustrations completed by Italian architect and graphic designer Babina.

Each drawing is intended to resemble "a huge, habitable sculpture" whilst merging the boundary between architecture and the natural world.

"The idea was to play with the animal world to shape it into an architectural universe," Babina told Dezeen.

"Each animal has aesthetic morphological characteristics that can inspire the creation of spaces and environments. The idea was to play with the animal world to shape it into an architectural universe."

Among the illustrations is an elephant-shaped floor plan where the staircase resembles a trunk, a crocodile with scale-like seating and zigzagging walls that evoke the body of a snake.

"I imagined animals and began to walk with the imagination within a space to give it a shape," Babina said.

Planimals is Babina's second project based on floor plans, following his Archiplan series that saw him create labyrinthine floor plans that represented the work of prominent architects.

Both projects are the result of his fascination for architectural drawings.

The use of each space is left undefined to encourage viewers' imaginations to take over, but Babina hopes that the shapes allude to different functions.

Each illustration combines curving lines with solid areas and voids, in which light and shadow help viewers imagine the qualities of the space.

"I did not want to build real buildings but rather transform plans as an independent communicative element. I like the idea that everyone can imagine how to live and what to do inside these buildings."

Babina is an Italian architect and graphic designer who lives in Barcelona. Among his other recent projects is an abstract poster series modelled on details of buildings by leading architects, his own version of the Kama Sutra, and famous architect quotes reimagined as advertisements. 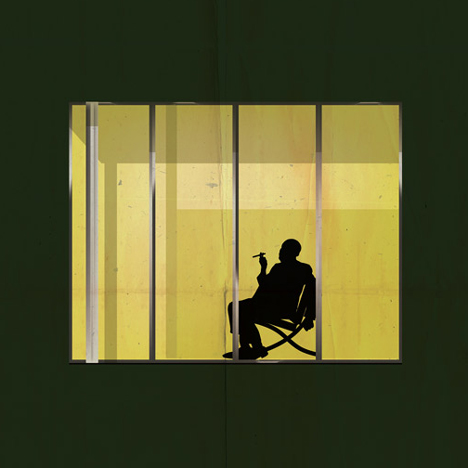 Animation is by Babina and music composition is by Elisabet Raspall.