Movie: in the final video interview from our exclusive series, architect Moshe Safdie says that architects are too concerned with designing objects to create skyscrapers that work with the city.

"They think of towers as great sculptures, twisting this way, twisting this way. But the tower is also a building block of the city, it has to be – otherwise there's no city, because all we build is towers," says Boston-based architect Moshe Safdie. 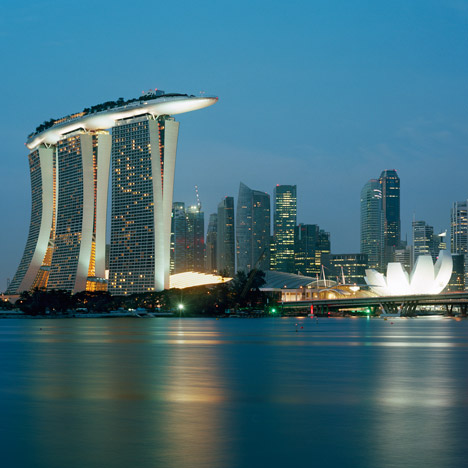 "We have to find a way to deploy towers in a way that creates additively, collectively, public realm. We haven't learned how to do that. And we will not solve it so long as architects are focusing on this object idea of a building and not its connectivity."

Safdie, who was named the 2015 American Institute of Architects Gold Medal recipient last week, rose to fame in his 20s with his highly experimental Habitat 67 housing development, which combined high-rise apartments with urban garden homes.

More recently, the 76-year-old architect has been back in the spotlight thanks to the success of his 845,000 square metre Marina Bay Sands complex in Singapore. At the centre of the development is a triple-tower structure connected by a roof garden with a 65-metre cantilever at one end.

In an earlier interview in our series, he explained that he had designed the building to propose a new kind of public realm, in opposition to developments of skyscrapers that were disconnected from their cities.

Safdie was speaking to Dezeen at the World Architecture Festival in Singapore earlier this year, where he used his closing keynote speech to call for a "reorientation" of the way cities are designed, saying that the vogue for skyscrapers and the privatisation of public space is creating cities that are "not worthy of our civilisation".

"The connectivity of a building informs its design. Something needs to connect," he says. "Like a lego piece needs to have the clicking connecting before you can connect it to the next lego piece. Architecture needs to make cities have this connecting."