Speakers that form an "eight-channel robotic choir" bob up and down in response to a singer's voice in a setup by Polish studio Pangenerator (+ movie).

Using Pangenerator's Echoooooooo system, a performer's voice is processed through eight channels and fed to eight speakers, each of which moves in response to the volume and tone of the generated sound. 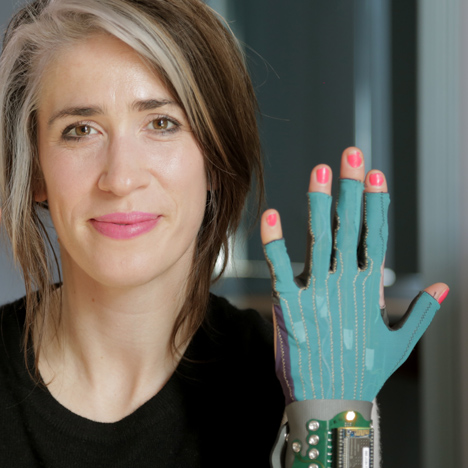 Echoooooooo is made from off-the-shelf speakers mounted onto a simple frame. The voice of the user is fed from a microphone into a "pure data patch" – pure data is a visual programming language developed by Miller Puckette in the 1990s for creating interactive computer music and multimedia works.

It is then delayed, glitched or pitch-shifted into eight separate audio channels, each of which is connected to one of the speakers.

This results in eight different interpretations of the sound the user is making.

"Since we can sequentially delay the signal to the speakers, the echo-like effect could be achieved and hence the name of the project – Echoooooooo – with eight 'o's for the eight speakers," said the designers.

"The custom-made construction is as minimalistic and unobtrusive as possible," said the designers. "It's in line with the less-is-more aesthetic that we tend to apply."

The project came about as a result of Pangenerator member Krzysztof Cybulski's investigations into digitally-controlled acoustic feedback – he mechanically controlled the position of a single speaker in relation to the microphone to generate a particular tone.

"The unintended side effect was the lifelike, quite adorable movement of the speaker making it perceivable as a living organism in that Pixar lamp sense," said the designers.

That drew the attention of Jakub Koźniewski, another panGenerator member, and he developed the concept further.

Koźniewski linked particular sounds with planned choreography of multiple speakers, mounting them on a custom-made construction and making the device interactive. The rest of the team completed the project.

"One of the things that is clearly seen in this project is the phenomenon of serendipity – discovering new ideas not by focusing hard to create something in a totally planned fashion, but rather experimenting freely and sparking unexpected new ideas along the way," said the designers.

The designers see applications both for a general audience in a karaoke setting, and for live concerts given by professional singers with the robotic choir as backing singers.

Pangenerator has previously created jewellery with projected light and an installation of pyramids that flashed in waves of illumination.