A Tel Aviv flat that was once the home of Israel's first prime minster has been renovated and extended by local firm Pitsou Kedem Architects to create a new basement level with industrial-style fittings (+ slideshow).

A framework of chunky black I-beams supports the ceiling of a new basement floor, added by Pitsou Kedem Architects to the flat formerly owned by the late David Ben-Gurion, who was instrumental in the founding of the Israeli state and was prime minister between 1955 and 1963.

"The ground floor apartment we designed was previously the home of Israel’s first Prime Minister, David Ben-Gurion, which lends historic significance and magic to the building and the apartment," said the architects.

The project, called Past Turned Into Space, involved reorganising the interior of the ground floor apartment, which is located within a two-storey block designed by Ukrainian architect Yosef Berlin in 1925.

The protected building features renaissance-style arches with segmental keystones, balconies and pale pink plasterwork, and is located within a UNESCO heritage site in Tel Aviv. 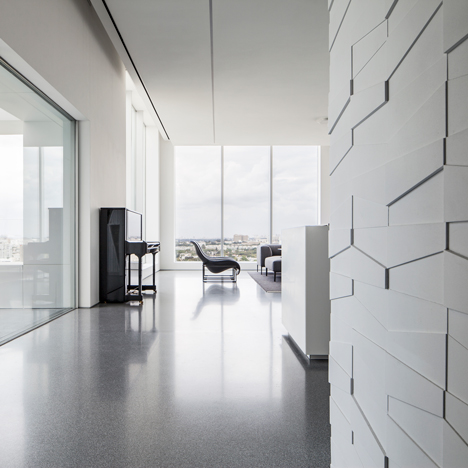 This meant the architects had to contend with severe building restrictions to add the subterranean level that would enable them to expand the residence into a 220-square-metre duplex apartment.

"Excavating in a preservation building is complicated," said the architects. "We had to change a central concrete pillar that supports vertically the whole building."

The new level is supported by timber-imprinted concrete and a six-metre-tall I-beam that spans the height of the two floors.

A palette of exposed concrete, glass and steel were continued throughout the interior, lending an industrial appearance to the interior spaces that contrasts with the building's ornamental facade.

"We chose to use concrete and steel because we treat them as timeless materials," said the architects. "This combination with a preservation building felt right."

"Since the construction elements we created were totally new, we took care not to hide them but left them exposed in order to tell the story of the renovation."

On the lower floor, glass panels pivot to reveal a study and bedroom adjacent to the double-height stairwell. Curtains can also be drawn across the glazing to give privacy from the stairwell.

Red door handles, patterned rugs and white fittings offer accents of colour to the grey-toned spaces, while furnishings, including moulded wooden chairs, aim to reflect the architectural period of the building.

"All the furniture was carefully chosen to complement the common culture that connects between two periods in time," said the team.

A steel staircase adjoins a metal-panelled wall at one side and breaks at a mid point to form a gap between the treads.

This upper section of staircase is enclosed by metal balustrades infilled with red mesh. A white light fitting with articulated arms and shades hangs over the fenced-in well.

Upstairs, a long light tube slices across the the timber-imprinted concrete ceiling – a feature also employed by the team in their renovation of a penthouse apartment in the city.

A length of dark metal extends from underneath one end of the polished stainless steel kitchen unit, before rejoining the floor to form an informal dining area.

By a soft seating area, an arched doorway leads to a street-facing terrace with a black and white chequered floor.

Photography is by Amit Goren, with styling by Eti Buskila.