Described by Camilo Rebelo as a "trojan egg", a reference to the mythical wooden horse that the Greek army hid in to enter the city of Troy, the pod is intended as a place for silence and contemplation. 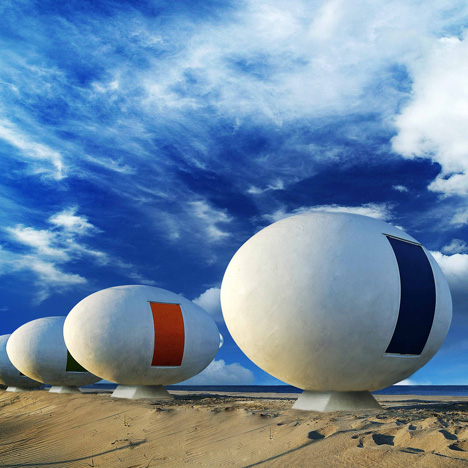 The architect first designed the structure – called Ovo, the Portuguese word for egg – for a client living in the Swiss Alps. Installed in his basement, it was used to display an artwork by Portuguese sculptor Rui Chafes.

More recently, the structure was recreated in Porto to accompany an exhibition of Chafes' work – comprising 33 egg-shaped pieces of marble and iron.

The juxtaposition of the two projects was designed to help visitors to the exhibition visualise themselves inhabiting one of the tiny sculptures.

"The purpose of this wooden egg is to create a void – to unveil a new dimension and through it potentiate mystery," explained Rebelo, whose past projects include a museum with a carved stone facade.

"Mystery is a condition that is very close to disappearing from our civilisation," he said. "This value is, for us, one of the main reasons of life and the egg is the dimension we choose to express it."

The egg measured seven metres wide, four metres deep and three metres high, and was constructed using CNC-cut timber. Its exterior was then coated with a thin layer of concrete, leaving a completely smooth surface.

Inside, an integrated bench created seating all around the perimeter, while a central ceiling light gave off a turquoise glow.

The exhibition opened in October and the egg remained in place until the start of this week.