Issey Miyake's pleated menswear is worn by models who jump and swing around the framework in a promotional campaign consisting of still images and a movie for the Spring Summer 2015 range. 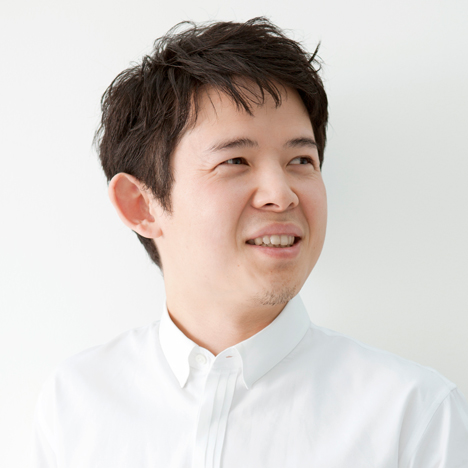 The installation is a development of the Stone Design's Line House project, presented at Milan's Salone Internazionale del Mobile furniture fair over a decade ago.

"We had to wait a long time to collaborate with Issey Miyake, but the wait was really worth it," said Stone Designs co-founder Cutu Mazuelos.

"The philosophy of Issey Miyake is to create starting from 'one string' that has a real affinity with the Line House idea," added Mazuelos.

The metal tubes are linked together with curved corners, forming a continuous angled line that acts as a spatial boundary.

In places, the frame supports white cushions to a form a sofa and an armchair, while a shelf resting on the structure also incorporates a sink.

The images are shot against a plain white background to provide a contrast with the colourful metal tubes and the equally bright tones of the fabrics used to create the clothing.

Models move around and interact with the elements of the "room" created with the frame and pose with sections of the tubing.

Mazuelos described the collaboration as: "A minimalist concept, where colour plays a key role and where a solid line made with a metallic tube literally draws an habitable space that fits perfectly with the simplicity, pureness and the power of colours and pleats of this collection, made by the Japanese mode genius."

Last year Dezeen spoke to Yoshiyuki Miyamae, Issey Miyake's head of womenswear, who said that the company is using technology to drive innovation in the brand's clothing.

Emmanuelle Moureaux installed interlocking coloured sticks at three of the brand's Tokyo boutiques in 2010, while Nendo displayed accessories atop clusters of steel rods at another store in the Japanese capital the same year.