The product – also called Dolfi – aims to remove the need for hand-washing clothes made from fabrics like silk, cashmere and lace that are easily damaged, as well as offer travellers a portable cleaning option. 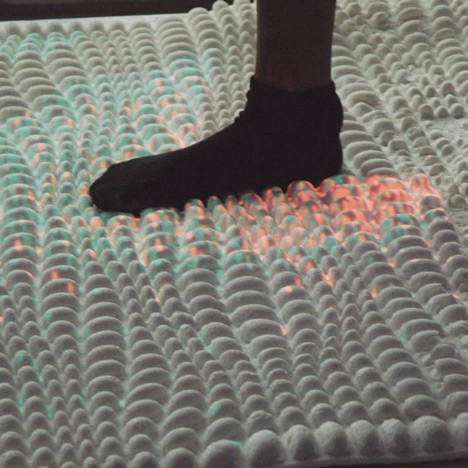 "The idea of Dolfi came after a few terrible experiences with laundry during my extensive travel," said Dolfi founder Lena Solis, who commissioned Fangueiro to design the product.

"I believe that ultrasonic technology will change the way we wash," she added.

According to the designers, once the Dolfi is placed in a sink or container filled with water and switched on, a device inside it known as a transducer converts electrical power into a range of high-frequency soundwaves that create millions of tiny bubbles in the liquid – an action known as cavitation.

These bubbles implode in on themselves, generating jets that drive detergent and water through the fibres of a piece of clothing without the need for extra movement.

Fangueiro created a smooth white plastic pebble to house the transducer. The pebble is sealed to make it waterproof and is attached to an electric power source via a flexible cable.

"Its smooth form provides the end user with the sense of friendliness and security that this object would help wash their most precious textiles," said Fanguerio.

"The curvature and acceleration of the surfaces are designed to communicate a high-end consumer product within its technological size. The end result is the small-size, hand-held product that is both high-tech and high-performing."

Ultrasonic processes are widely used for cleaning objects made from more solid materials, like jewellery and dental equipment.

Swiss company MPI Ultrasonics developed a range of frequencies that are suitable for cleaning textiles. MPI's Multifrequency, Multimode, Modulated Sonic & Ultrasonic Vibrations technology can be used for a number of different purposes, as the waves it generates can be tuned to suit different materials and functions.

"The precisely modulated ultrasonic waves tackle dirt and bacteria right down to the microscopic level. This revolutionary method is able to clean clothing from the inside out without ever damaging or discolouring the fabric," said a statement from Dolfi.

"This compact but powerful device consumes about 80 times less energy than a conventional washing machine, helping you make a huge positive impact for the planet and, of course, for your wallet."

Dolfi's name is a "tribute to dolphins", animals the company describes as "the most advanced users of ultrasound".

Dolfi will launch a crowdfunding campaign to raise $100,000 (£66,000) for production of the device on online platform IndieGogo later this month. A portion of the funds will be donated towards dolphin research and welfare organisations.