GamFratesi's circular Karui trays come in three sizes, each featuring a small lip around the outside edge. 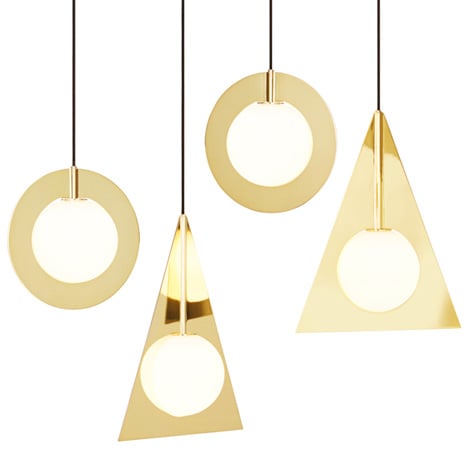 The trays are formed by metal spinning – a production technique that 408-year-old company Skultuna has been developing since its early days as a brass foundry in the village it takes its name from.

Coloured disks of leather from neighbouring tannery Tärnsjö are used to line the base of each tray, with white, blue and green among the available hues.

"The trays are called Karui, which in Japanese means soft, in relation to the leather part, but also light – the trays have a light aesthetic," said Stine Gam, who co-founded the studio with Enrico Fratesi.

"Japanese gives other meanings as well, such as 'easy', 'easily' and 'quick perhaps', which is the informal feeling we want with the trays – placing our personal things on the tray becoming a functional and personal easy everyday gesture," she added.

The Karui trays are currently on show at the Maison&Objet trade fair outside Paris, which continues until 27 January. They will also be displayed at next month's Stockholm Furniture Fair.

Other brass objects produced by Skultuna include vases by Paolo Dell'elce that are modelled on still-life paintings, as well as designs by Monica Förster and Claesson Koivisto Rune.