US architecture studio Norman Kelley used materials such as brass and polished quartz to update the lobby in a 1980s skyscraper designed by John Burgee and Philip Johnson.

The project – formally called the 190 South LaSalle Street Lobby – is located within a postmodern-style office tower in Chicago's Central Loop. The 41-storey building was originally designed by American architects John Burgee and Philip Johnson and opened in 1987.

The current owners, Beacon Capital Partners, hired local studio Norman Kelley to update the ground-level lobby, which is open to the public.

"The overall goal of the project was to provide a safe interior public space that encourages community and contemplation, or a space to linger within," the studio said.

The lobby has a number of notable features that were kept intact. These include rose-hued marble pilasters, a black-and-white marble floor, and a 50-foot-tall (15-metre) vaulted ceiling sheathed in gold leaf.

Norman Kelley added a range of new elements, including electric turnstiles, security desks and a cafe. Brass and polished quartz were used for the desks and cafe.

The studio also designed new furnishings for the project, including a curvy sofa and long banquette, both in a vanilla hue.

The seating was inspired by two sources – Vitra's office furniture and group seating in the now-shuttered Four Seasons restaurant in New York, designed by Philip Johnson.

The seating was paired with round, brass-and-marble tables topped with portable LED Carrie lamps by Norm Architects.

The north apse, which once held a marble security desk, was redesigned as a semicircular amphitheatre measuring 12 feet high and 27 feet wide (3.7 by 8.2 metres).

The tiered seating is made of perforated brass risers and honed, off-white marble with gold veining. Railings are made of brass pipes.

To animate the space, the architects created an "immersive audio experience" in collaboration with the studio iart and sound scenographer Idee und Klang.

The weather-inspired audio installation was designed to be triggered by 81 light sensors and three motion sensors that are located behind the risers.

"Once the amphitheatre senses one's presence, a musical score comprising 15 instruments, four tempos, and seven keys and scales play across eight of the nearest 91 speakers," the team said. 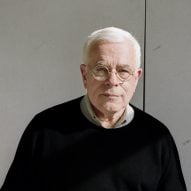 "The brass-and-marble amphitheatre is a responsive instrument that uses real-time data inputs, like weather and time of day, to compose an ever-changing sonic environment."

The amphitheatre stands in contrast to the southern apse, where a towering bronze sculpture, called Chicago Fugue by Anthony Caro, was installed in 1987. The abstract sculpture is composed of anomalous shapes and alludes to musical instruments.

"Like an aural diptych, the lobby presents two musical sculptures: one figurative, the other literal, to welcome you back to work," the team said.

Norman Kelley was founded in 2012 by Carrie Norman and Thomas Kelley.

The studio's other projects include an Aesop store in Chicago's Bucktown neighbourhood, which features reclaimed bricks arranged in pinwheel patterns, and a flagship store for clothing retailer Notre that is housed in a building dating to 1906.

The photography is by Kendall McCaugherty Ristau.